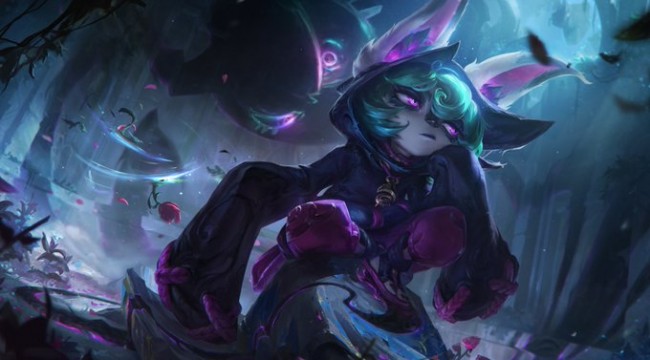 Riot Games released a trailer video for Vex, the new Champion that will be added to the roster of League of Legends. The said video features the Champion, who has the title "The Gloomist," and its gameplay, as well as its abilities.

Vex, according to NME, was supposed to arrive before Akshan during the Sentinels of Light event, however the developers decided to push back the Yordle's release at that time.

In her trailer video, Vex is not like her fellow Yordle champions such as Teemo, Lulu, Ziggs, Corki, Fizz, Heimerdinger, and Poppy, who all have jolly and free-spirited attitude. DBLTap described the Champion as "gloomy and melancholic" that can be easily annoyed when laughs and giggles are around her.

But this sad and emo Yordle is the one thing players would not want to mess with, especially in the mid-lane, as she has her "friend," Shadow, to help her control the battlefield, as well as a plethora of abilities that makes her a classic battle mage.

The said abilities were not easily described by Riot Games during her trailer video, however from the looks of it, most of her abilities are focused on crowd-control, while splitting opponent teams in order to take them out individually, which makes her vital within team fights.

Her Q ability, according to GameRevolution, lets Vex fire a wide projectile that will start slow at first, but later will speed up. The said ability has a long range and a wide area of effect (AoE).

Her W ability will let the Champion mark an enemy Champion before pulling it closer towards her using her Shadow, then casting a "fear" debuff to them.

This ability, according to Comicbook, can be used to those Champions who have dashed, and can affect even those who do not have dash or did not execute a dash. She would also receive a shield after casting said ability.

Her E ability can create an AoE vortex in a target area, which can expand, making the enemies who are in that said vortex receive the "fear" debuff.

Her Ultimate Ability can make her fire her Shadow long-range to an enemy, teleporting her to that target in the process, while dealing, as Riot Games' Community Coordinator David "Phreak" Turley would always say in his Champion Spotlight videos, "tons of damage."

This ability might reset after she takedown a target opponent as she was seen doing the said ability up to three times during a clash, which can be a great move for capturing an objective while jumping between weakened enemies.

According to Sportskeeda, these aforementioned abilities, along with her scaling, will determine the fate of the matches in the multiplayer online battle arena (MOBA) game, making her entry in the League of Legends a catalyst for a change of its gameplay dynamics.

Vex, according to DBLTap, is expected to be released in League of Legends following its incoming Patch 11.19 Update. Players who want to test this Champion will have the opportunity to do so in the game's public beta environment (PBE) starting September 8th. Her full release will be on September 23rd.

Aside from the Champion, her alternate Champion skin will be available in the game's shop. The skin, which also shown in her trailer video, sees Vex sporting a neon blue hair with purple highlights and a white with gold dress that is similar to that of the Sentinels Champion skins.