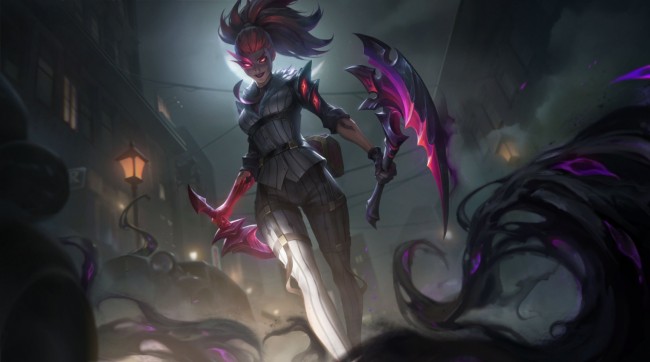 In this splash art that Riot Games revealed in their Weibo Page, Akali, one of the Champions in "League of Legends" wears the "Crime City Nightmare" Champion skin.
(Photo: Photo from League of Legends Updates' Twitter page, @LoLDailyUpdates)

The said Champion skin line, according to The Game Haus, was won first place at a fan poll made by Riot Games at the beginning of the year, where fans place their votes on what Champion skin set they want to be released in League of Legends next.

Other skin sets that were on the line during the said fan poll are the Debonair 2.0 skin set and the Monster Tamers skin set.

Aside from the said Crime City Nightmare, the developers also released in their Weibo page several splash arts of what could have been a potential new Champion skin line.

Bring in the Nightmare

Riot Games posted five splash arts of League of Legends Champions wearing the Crime City Nightmare skins. According to The Game Haus, the said Champion skin line shows off the undercity within Runeterra, where crime rules above all.

According to Sportskeeda, the said splash arts, which shows Darius, Zyra, Akali, Twisted Fate, and Shaco, where then revealed in a Twitter post after shown in the Chinese blogsite.

The Crime City Nightmare skins, according to Dot Esports, sports a haunting presence while donning hues of white, black and bright purple to reveal its heavy emphasis towards dark magic. The skins also appear to have reddish glowing eye-like decorations adorned in each of the Champions' armor.

By pairing these themes with clean masks and stylish suits, they are clearly bringing the style of an underground crime syndicate living the criminal life.

The said skin set, which base from the splash arts, was worn by Seraphine, Xayah, and Anivia, sports a mix of bright orange, green, and yellow, apparently playing on the theme, which is inspired by the immortal bird. To top it off regarding the said homage, they were also given ample amounts of plumage.

In case of Anivia, however, the Cryophoenix sports a large gem on her head as well as rainbow wings, giving it a god-like aura.

The Crime City Nightmare Champion skin line, according to Sportskeeda, is expected to be released in League of Legends during its possible Patch 11.17 Update.

If the two-week schedule per update in the game will be followed, it might be released around August 26th, two weeks away from the incoming Patch 11.16 Update, which will be rolled out this August 11th.

As for the pricing of these skins, Riot Games did not announce how much these skins costs in their Weibo post nor has an announcement regarding it. But they might reveal it at some point in the future.

In order for players to have Champion skins like the aforementioned ones, they need to either buy them in the in-game store or fulfill any in-game quests or tasks.