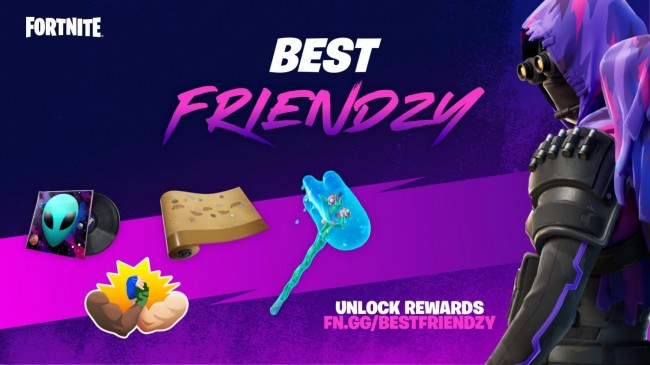 It is time to grab a friend and earn that "Victory Royale" together as Fortnite launches its "Best Friendzy" limited-time event. The said event, according to Spieltimes, will give opportunity for players to bond with their in-game friends and spark up friendships while working together in earning event exclusive rewards.

Before this, the shooting game have seen bonds that created while on the battlefield for years, especially in those times that they want to complete an objective as a team, slaying opponents during their hours-long worth of sessions.

How Does the Event Goes

In Best Friendzy limited-time event, according to a post in the Epic Games' Fortnite webpage, the player and its in-game friend will compete in a normal Battle Royale game, either a Duos, Trios or Squads, or in a Creative game to earn points.

Join and play with your friends to start earning free in-game rewards!

During a selected 60-minute Daily Bonus in a gamer mode, whether if it is Battle Royale or Creative, the friendly duo will earn a triple multiplier bonus in their points for their time spent playing in the game.

For example, a duo playing in a Duos Battle Royale can earn three points for every 10 minutes that they are playing in the game instead of only one point.

In case a friend could not make it to play Fortnite with a player due to schedule conflicts, he or she can still earn points with any other player that is included in his or her friend list during the event period.

They can also track their progress within the event with their other friends, however, they must first complete fully the same progression with a single friend to unlock the rewards.

In order for a player, and his or her in-game friend, to participate in the Best Fiendzy event, according to Dexerto, they must go to the specially dedicated webpage for the said event, bestfriendzy.fortnite.com.

From there, they can click either the "Unlock these Rewards" or the "Get Started" button. Either way, they need to enter their Epic Games account in order to access a webpage where they will select their desired Daily Bonus time. The said webpage also has a tracker for them to track their progression within the event.

Players must be registered and logged in to the said webpage in order to look at the said tracker. Their friends are not required to register as they can see their progress together, but they can register if they want to track their own progress.

Players must expect a 30-minute delay for the status of their progression to be updated within the webpage.

Also, aside from the friends list from their Epic Games account, friends who are in the same list from other platforms such as in PlayStation Network or Xbox Live are also eligible to join as long as the accounts are linked to their respective Epic Games account.

For every point that a player and his or her in-game friend earned in Best Friendzy event, a reward will be unlocked depending on how much they have accumulated.

The Best Friendzy limited-time event will run until September 12th, at 4:00 PM EDT.

READ ALSO: J Balvin Style 'Fortnite' Skin: How to Get, What Does it Look Like, Accesories, Release Date, MORE Details