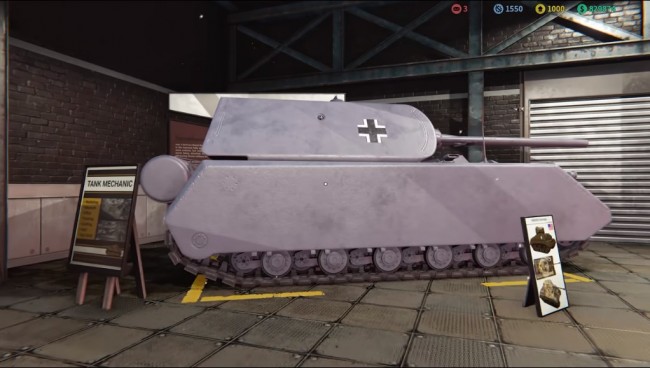 In the game, players will have the opportunity to do it with one of the 15 vehicles, 12 of which are tanks, while the rest are either armored vehicles or self-propelled guns. These vehicles can be found either at the scrapyard or buried in the ground, which they can excavate using special tools.

Along the way, they will also use tools such as the hammer, the rust removal tool, the grinder, the sandblaster, the wrench tool, and more to renovate the tanks.

They can customize their restored tanks with paint, camouflage, and decals, like what the members of Owarai Girls' Academy did to their tanks in Girls und Panzer, as well as test driving them and taking them to the shooting range to experience firing its barrel.

Once they are satisfied, they can either sell them for more profit or open their own tank museum.

How to Restore Panzer VIII Maus

The Panzer VIII Maus is a German super-heavy tank that was supposed to be rolled out during the World War II. The said tank boasted a heavy armor and a 128mm KwK 44 L/55 gun that can destroy every Allied armored fighting vehicle at ranges exceeding 3,500 m.

However, the tank was not fully deployed in every war theater in Europe as its testing grounds were captured by the Soviet army in 1945 while it was testing on its second prototype, the V2.

Nowadays, the Maus can be seen in either tank museums, in video games such as World of Tanks, or in other forms of media like the aforementioned Girls Und Panzer, during the match between Owarai Girls' Academy and Kuromorimine Girls' Academy.

In Tank Mechanic Simulator, the Maus is part of its recent Patch 1.2.6. Update. To restore that said tank in the game, players must look for it first. In a Youtube video made by Alex K, players can look for it in the scrapyard. When they say the Maus, who appears to be rusty, they can buy it in order to start said restoration.

Once the tank is in their garage, they can now remove the tank body's internal and external components, including its engine, tracks, wheels, lights, suspension, other external parts, fuel tank, radio receiver, other internal controls like the steering lever, gad pedal, and hand brake, ammunition boxes, and electric motor.

They will also remove the parts in its turret, including the gun barrel, the internal parts for the cannon, the projectile caps, the seats, the air compressor, the guide and bearer rollers, and its other parts.

Once they are done removing the parts, they may now start restoring the Maus, beginning with its engine. Players will notice that the engine block is rusty, so they need to remove it. To do that, they will left-click to begin the said rust removal, which could take minutes.

Afterwards, using the sandblaster, they will sandblast the said engine until it looked brand new. Once they are done restoring the engine block, they can now assemble the whole engine.

They need an oil filter, a water pump, a supercharger, an ignition magneto, the engine heads, a crankshaft, the pistons and their rods, the generators, a starter engine, a fuel pump, an injection pump, the spark plugs, the exhaust manifolds, the valves and their valve arms, and the cooling water outlets.

After that, they may proceed re-assembling the other parts, including its suspension, other interior parts, and the barrels for the turret. Finally, they can replace its oil, fuel, and coolant before starting the engine to see if it can run smoothly.

Once it is good to go, they may now test drive their newly restored Panzer VIII Maus.

READ ALSO: 'Car Mechanic Simulator 2021' Fastest Minivan Restoration Guide: How to Make it into Supercharged One that Would Make a Soccer Mom Happy