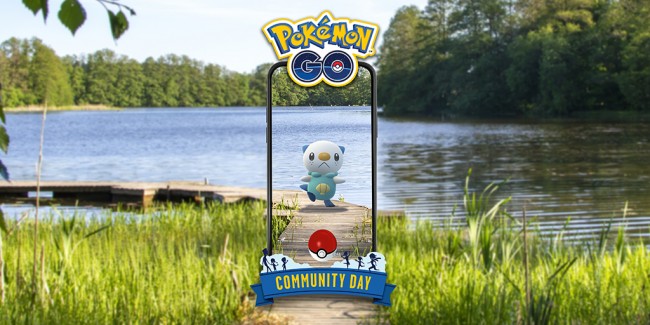 It is time once again for Pokemon Go Trainers to meet and have fun while catching Pokemon and receive rewards and bonuses as the game's Community Day returns for this month of September, and for this month's event, Oshawott, the Water-Type sea otter Pokemon, will be on the spotlight.

Much like the previous Community Days, Oshawott will be spawning in the wild more frequently, giving the Trainers an opportunity to catch one of the Unova region starter trio, as well as other rewards, bonuses, and an exclusive move, that they could earn within the said event.

As mentioned earlier, during the Community Day, Oshawott will be spawned more frequently in the wild. According to a blog post in the game's website, Trainers can either use an Incense or a Rainy Lure module to increase the odds of catching the said Pokemon.

🎟️ A ticket for the #PokemonGOCommunityDay exclusive Special Research story featuring Oshawott is now available in the in-game shop! 🎟️

If they are lucky enough, Trainers will also have the opportunity to catch a Shiny version of Oshawott. According to Gamesradar, the event will increase the odds in catching one, which is normally 1 in 500.

In order to catch it, they need to encounter every Oshawott found in the wild during the event's six-hour window. Once they are taken to the capture screen, they would see if they have found a Shiny Pokemon or not. Oshawott's Shiny version is a bit greener and the shell of its belly has an orange tint.

And speaking of catching an Oshawott, to help them catch the Water-type Pokemon, and its Shiny counterpart if they are lucky, according to CNet, Pokemon Go's in-game shop will sell a Community Day bundle.

They can also buy the "From Scashops to Seamitars" event-exclusive Special Research story from the same in-game shop for $1.00. The said Special Research will give Trainers rewards such as XP, Pokemon encounters, Stardusts, PokeBalls, and a Rainy Lure module.

Pokemon Go's Community Day, according to the game's website, will be rolling out on September 19th, from 11:00 AM to 5:00 PM local time.

During that said event period, Trainers will receive bonuses such as triple Catch XP boost, as well as Incense and Lure Modules such as the Rainy Lure modules, once activated during the event, will last up to three hours.

According to CNet, those who will evolve their owned Dewott, Oshawott's first evolved form, into Samurott during this month's Community Day can teach them Hydro Cannon, which they can use in either Raids or player-versus-player (PvP) battles. They will have until 7:00 PM, local time, to do so.

They can also teach their Samurott the Razor Shell Charged Attack, which they can do even if the event ends.

In order to prepare themselves in the Community Day, players must have the essentials that they will need, such as Incense and PokeBalls, as well as clearing up their own Pokemon Storage as they will catch Pokemon all day during the event.

READ ALSO: Pokemon Go Azelf, Mespirit, Uxie 5-Star Raids Guide: Where Will They Appear, Will There be Shiny Versions + Counters