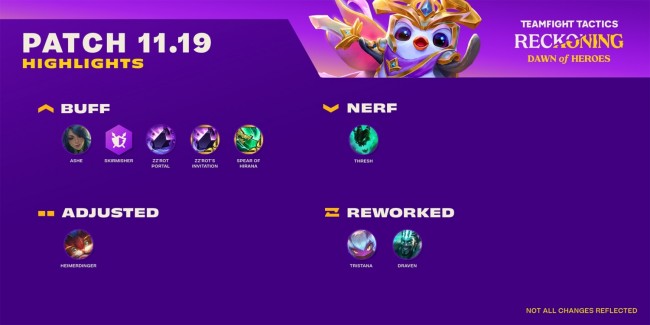 The changes, including Champion nerfs and buffs, that will be implemented once the Patch 11.19 Update rolls out in Teamfight Tactics.
(Photo: Photo from League of Legends' Website)

Teamfight Tactics receives its Patch 11.19 update, the third to the last patch for its Reckoning Season. The said patch update will bring several balance changes to its Champions, as well as other changes to its gameplay and system.

The Patch 11.19 Update, according to Dot Esports, will be rolled out in time for its Reckoning World Championship, which would take place on October 1st and will last until October 4th.

One of the Champions in Teamfight Tactics that will be hit by the Patch 11.19 Update is Draven. According to Sportskeeda, the said patch update reworks his passive, making it ignore 50% of his target's armor.

According to the patch notes that were posted in the game website, the reason for the nerfs is to remove the need for him to be equipped with a fourth item such as the Last Whisper, forcing players to build only three items for the Champion.

Tristana's Rocket Jump will also receive rework, gaining her attack speed for 4 seconds after leaping away from the enemies. Her attack range will be lowered from 5 to 4, but her attack damage and starting mana will be increased from 60 to 65 and from 50/125 to 60/125, respectfully.

Aside from the aforementioned Champions, Teamfight Tactics's Patch 11.19 Update will also bring in balance changes to its items.

According to Upcomer, the Zz'Rot Portal, as well as its Radiant counterpart, will receive an increase for its taunt hex radius from two to four, and can taunt Assassins. Also, the Radiant Spear of Shonjin will receive an additional 20 ability power bonus, while the Tome of Traits' drops from a gold orb will have lowered chances by about 40%.

On the other hand, the patch update will tweak the Tutorial in the game's mobile version, adding in a smaller number of Set One Champions, as well as limited number of items, traits, and adjustments.

As for the bug fixes, the patch update will just improve the tooltip clarity for the Rangers.

TAG League of Legends, Teamfight Tactics
© 2020 Game & Guide All rights reserved. Do not reproduce without permission.