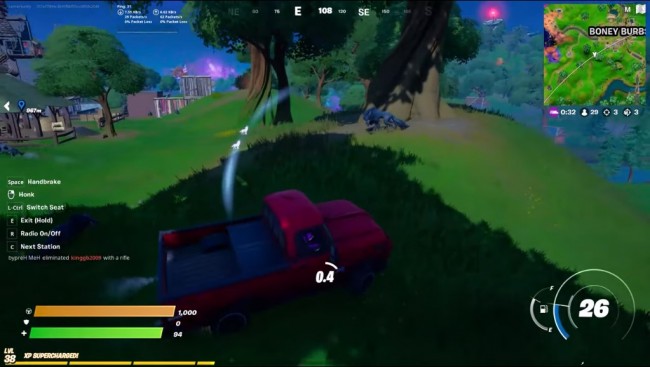 Another week, another set of challenges in Fortnite for players to complete. This time, in Chapter 2 - Season 8, players will complete a set of Punchcard Challenges coming from the shooting game's non-playable characters (NPCs).

For this week, players will complete a set of Punchcard Challenges from the Big Mouth and Grim Fable. In these challenges, they must find an ice machine for the former, and hunt a wolf in the latter.

The Best Place to Hunt Wolves

In one of the Punchcard Challenges for the aforementioned Grim Fable, players must locate, and hunt down, a wolf that is in the game. According to Gamerant, there are four locations for them to go to and find the said beast.

The wolves can be found in either of these following locations - in either the west or southwest of the Boney Burbs, everywhere in the Weeping Woods, in the Grassy area west of the Lazy Lake and north of the Misty Meadows, and North of the Catty Corner.

Players can land to either one of these locations, but in order to make the said process easier, and to finish the said task faster, according to Upcomer, they must travel north to the Boney Burbs. The said location is said to have an increase amount of wildlife, including wolves.

They can also find a pack of wolves in areas surrounding Boney Burbs, some of which as traveling east and southwest of the said point of interest (POI).

Also, the best time of day to find the wolves is when the sun comes down in the island, so they need to make sure that it is dark as night in Fortnite in order to hunt them.

Once they've found the pack, they will hunt one of them down to complete the said task. They can also do the last task in Grim Fable's Punchcard Challenges in the same area, which is for players to Emote within the 10 meters of the said area.

As for Big Mouth's Puchcard Challenges, one of the said tasks in this set is for players to find an ice machine. According to Sportskeeda, there are 22 different areas in the map for players to go to and locate the said machine.

But among them, according to PCGamesN, there are three best locations for them to search for the ice machine. For the first location, players must go to the main lodge on the northern side of the Weeping Woods, and scour both floors until they find one of the three ice machines in the said location.

For the second location, players must choose either of the four gas stations in the map that has the ice machines.

They can go either south of the Believer Beach and head straight to Holly Hedges until they see a big Viking ship, or north of the Sludgy Swamp until they saw a three-way stop at the end of the road, or in the west of the road that is heading towards the Misty Meadows, or in the south and southwest near Catty Corner.

Finally, for the third location, they can go either Craggy Cliffs or Retail Row, where they can locate the said machines behind the shops in these said locations.

They can also land or travel to the Believer Beach, where there are six spots for players to choose to go. Two of the machines are on the dock, while one is on the right of the big swimming pool on the location's east side, and the remaining three are scattered in the area's different buildings.

READ ALSO: 'Fortnite' Patch 18.10 Update: How Long is the Server Maintenance, Fixes, Additions, and Other Things Players Could Expect