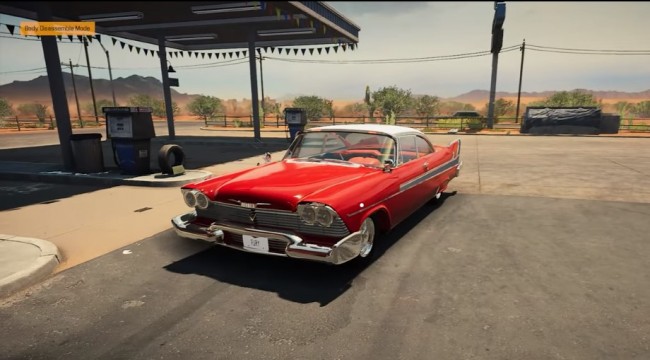 These cars, once restored using more than 4,000 parts or repair its parts, if some of them can do so, can either be sold for additional profit, or keep it as part of their collection.

One of the cars that they want to include in said collection in the game is the Plymouth Fury, a convertible that was made by Plymouth, a division in Chrysler, in 1959 until 1978.

How to Restore a Plymouth Fury

In order to obtain said car, they must to download the mod first, which was mentioned earlier, is available in the Steam Workshop. Once they downloaded it, they will see the car in the Junkyard, the Barn, the Car Salon, and the Car Auctions.

Once they got the car, according to Alex K's YouTube video they must wash it first before proceeding to the repairs. With the changes made by the game's Patch 1.0.9 Update, washing the said car will now add more of its value.

Afterwards, they will transport the car to the Car Lift in their garage, where they will disassemble each of its parts until the body frame remains. This includes the engine, the body kit, the wheels and its suspension, and the interior.

After disassembling the parts, they will use the Wielding Machine to repair the whole body frame. Then, they will proceed in repairing the other parts, including the engine itself.

The Plymouth Fury has a V8 engine, so they need its engine block to be used as its base. Then, they will purchase from the shop or repair its crankshaft, its oil and fuel filter, its power steering pump, its alternator, its ignition distributor, its camshaft, its ignition coil B, and its piston, along with its rings.

Once they finished rebuilding the engine, they will remount it in the car using the Engine Pulley. Afterwards, they will reassemble the rest of the car.

Once they reassembled it, they can repaint the car, which can also increase its value, re-align its headlights and wheels, tune up the gears in its gearbox, and test drive their very own Plymouth Fury.