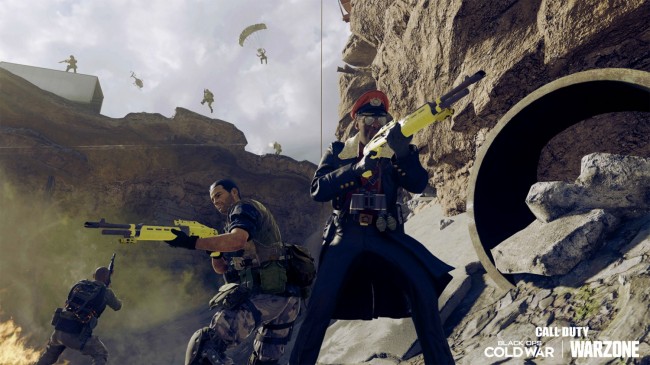 The patch notes for the Season 6 Update for Call of Duty: Black Ops Cold and Call of Duty: Warzone revealed that the Verdansk map will have its last hurrah in the said new season. The said map will still receive several changes before it will not be playable anymore.

The said changes for the map include new areas, including fissures, bunkers, and the Gulag, that players will traverse, and use in their advantage, during the game.

One of the biggest changes that players would first see when they play in Verdansk are the fissures that ruptured several parts of the map.

Downtown Verdansk after tonight’s season 6 update will have a lot of changes.

Notably, Nakatomi Tower still is there, but everything up to that building from stadium appears to be leveled. #Warzone l #CallOfDuty pic.twitter.com/fOjEJzV3JT

According to GamesRadar, the said fissures will bring strong impact on the Downtown area, with several of its buildings like the Grand Hotel and Verdansk Museum of Art became collapsed into rubble.

However, the Stadium and Hospital were left standing, but has significant changes in its appearance and surroundings such as the fault line that almost split the former by half, while the fissure caused a hill-like appearance in the latter's surroundings.

Despite of their visual appearances, players will see these fissures as an advantage as they will offer new avenues to move through the area either by foot or, if the do it very carefully, by driving in vehicles.

They can also use the exterior ascenders that are positioned on either side of the crevasses as they will help them get in the battlefield quickly, as well as getting out of it, especially when the circle starts closing in during the final minutes of a battle royale match.

These faults can also be used as a cover to any sniper attacks, such as the case of those that are within the area near the Verdansk Hospital, where snipers tend to use the building as a vantage point for sniping enemies.

The Bunkers are Ready

Another change in Verdansk is the World War 2 Bunkers, which can no be accessible in several areas of the map.

According to the patch notes in the Call of Duty website, there are three area that has these said bunkers - one that is located near the Radar Array and the Bloc 15, another one that can be found in the north of the electrical transformers in the Airport Maintenance area, and the last one that can be seen in the third north of the Silos within the Boneyard.

Unlike the previous ones, players can access these bunkers through a hole, which was left behind by a drill that was previously hidden in one of the shipping containers, by either attaching their climbing gear to the cables or, if their brave enough and can take the damage, by jumping down through it.

Once accessed, players may take the opportunity to spawn at several key points in the area such as piles of decommissioned bombs, desks, and bunk beds. These piles will have Supply Boxes well hidden in them, so they need to check them out as well.

Exploring the said bunkers will also bring them to an escape route, which will transfer them to another place in the Verdansk, as well as other secrets that was buried underground that they need to discover.

The said place is also an advantageous spot for close quarters combat, so if one player encounter another, make sure to have their knives, shotguns, and submachine guns prepared just in case.

Welcome to the Gulag

Finally, a new Gulag map will be ready for Season 6. This time, it will be the Original Gulag, as the game describes it in their patch notes, as the said map will be the near-replica of Call of Duty: Warfare's Gunfight game mode map.

The said area is small and has three primary lanes with the clear view from a spawn point into the other. Several parts of the area, including the sinks and showers, will offer cover and visual obstruction, while the lockers within the spawn points can be used as an advantage because of its unique sightline over the middle of the map.

The Overtime flag, on the other hand, is in the area's dead center, making players who tried to go there experience a firing squad-esque ending due to the sightlines across all three lanes. Because of these, players must be cautious of where their opponents will shoot.