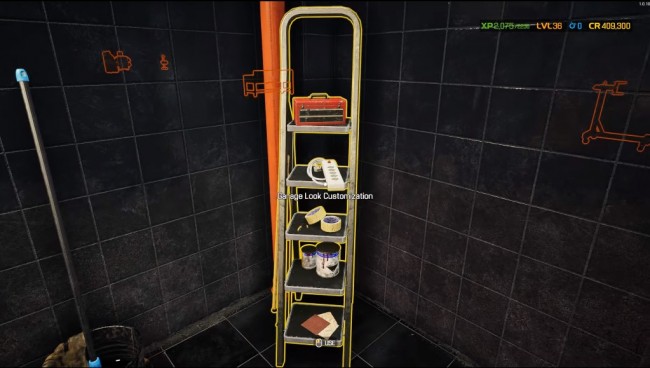 Once unlocked, players can customize their own garage using the Garage Look Customization Tool.
(Photo: Screenshot from Shark R's "Car Mechanic Simulator 2021 How To Upgrade and Customize Garage & Service! NEW!")

In Car Mechanic Simulator 2021, players restore and repair cars that they could either sell for additional profit or add into their collection. They can also repair cars that was given to them through Story Orders, which will also give them profit, as well as XP.

These things are happened inside the garage, which is the player's "center of operations," as well as the starting point for their journey towards dominating the automotive industry in the game.

The said place has all the tools that they need in order to make their business successful. And because the fact that the garage is theirs, they can customize it.

How to Customize their Own Garage

In order to customize their own garage, according to Shark R's YouTube video, players must first unlock the Customization expansion. The said expansion will be unlocked if the player has the Lifter expansion, as well as 1,000 Credits as payment.

Once they have unlocked the said expansion, they would notice a metal ladder in the entrance towards the Engine Stand and the Repair Tables. When they hover the cursor, the words "Garage Look Customization" will appear. This is the tool that they click if they want to customize the whole garage.

Once they click the ladder, they will be transported to the overhead view of the garage. On the lower left corner of the screen, they will see two tabs, the Section, which will transport the players to the different sections of the garage, and Option, or the designs for that specific garage section.

Also in that portion, there is the Change Camera, where they can change where the camera's angle, Reset Section, which resets a section in the garage that was moved, Reset All, which resets everything, and Close.

Every Section in their garage has its own customizable Options, which players can choose base on their reference.

They can mix and match the colors and textures of every section, ranging tiled to upholstered for the floors, and bricks or concrete for the walls, or if they want the old design, they can choose the Default design in the Options tab.

Players do keep in mind that in this expansion, the customization will majorly focus on the walls and floors of every section of the garage.

Once they are satisfied with their own customization, they will click Close. If not, they can either reset one section or all of them. They can now enjoy the new look of their garage after customizing using the Garage Look Customization tool.