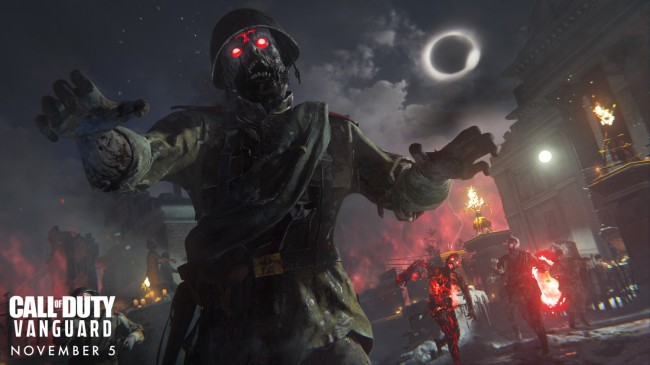 The said mode for Call of Duty's newest incoming installment will expand further the story of the Dark Aether, which was started in Black Ops Cold War.

With the release of the said game mode, which will coincide with Vanguard's release, new forms of the undead will emerge for players to exterminate.

Your mission: Stop the undead army with new powers from the Dark Aether... 😈

In Call of Duty: Vanguard's Zombie mode, according to PSLS, players will be transported in World War 2 Stalingrad in 1944 where a failed Nazi experiment opened a gateway that lead to the spawning of five Dark Aether entities.

These entities are bonded with the mortals through otherworldly artifacts, all of which were stolen by a Nazi officer, Oberfuhrer Wolfram von List.

The said officer has bonded with one of the said items, which has the former lord of the Dark Aether, Kortifex the Deathless. With the said artifact in hand, Von List can revive the dead.

Now the army of Nazi zombies have plagued over Stalingrad, and it is up for the players to clear them from the Russian city, and to stop von List's plans.

The Zombies mode in Vanguard, according to a post in the Call of Duty website, is a combined effort of both Treyarch Studios and Sledgehammer Games.

The former utilized the latter's tech that was used in the game in order to let the players immerse in a brutal zombie-filled Stalingrad that will appeal both the new players and the old fans of the game.

They will battle new enemies such as the machine gun-weilding Sturmkrieger and the exploding Boom Schreiers in places such as the rooftops of Hotel Royal or the swamps of Shi No Numa, as well as Stalingrad itself, where they can traverse in order to access perks, weapon upgrades, and the Pack-a-Punch.

The said game mode will also introduce a new upgrade, which is one of the many powers that will be offered to them by the Altar of the Covenants.

The said altar will let the players choose from its lists of upgrades as long as they offer a Sacrificial Heart loot item to it. These upgrades are randomized each time they return from an objective.

The said upgrades will help them in their progression inside Stalingrad, such as the Ammo Gremlin, which reloads any non-equipped weapons over time, the Brain Rot, which can turn any zombie into their ally, and the Unholy Ground, which can hold down chokepoints and objectives.

Aside from the upgrades, players will also encounter several artifacts that are also connected with the Dark Aether. According to Venture Beat, each of these artifacts possess different abilities that they can use in battle.

The Sword of Inviktor lets the wielder cast the Ring of Fire attack, while the Mask of Bellekar grants it the Aether Shroud ability. The Horn of Norticus gives it the Frost Blast ability, and the Dragon of Saraxis can drop Energy Mines.

These abilities, according to Gamespot, will function just like Black Ops Cold War's Field Upgrades, complete with cooldown timers.

The Zombies mode of Call of Duty: Vanguard will launch alongside the main game on November 5th.