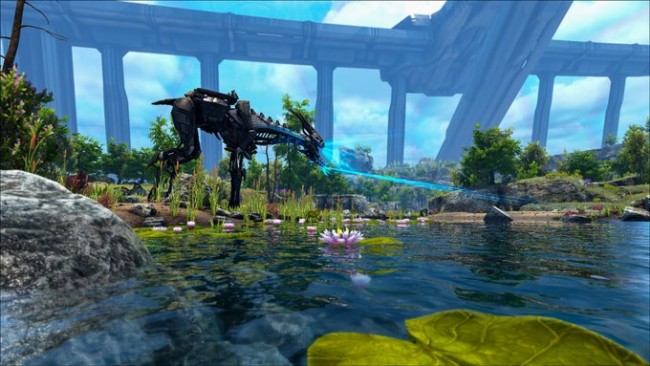 ARK Survival Evolved received patch updates for both its PC and PlayStation 4 versions, which will bring changes and fixes to the open world survival game.

For the PC's version of the update, it will bring balance tweaks for the game's creatures and other aspects of its gameplay, including its weapons, while for the PlayStation 4's version, it fixed several bugs and issues.

For the PC version of ARK Survival Evolved, the patch update, according to Player.One, increased the slots for the Industrial Grinder from 30 to 60, as well as the register range for the Tek Cloner was also increased by three times.

However, the update decreased the stack size for the Tek Surveillance Console from 100 to 5.

The patch update also increased the smelting output of a Magmasaur by 100%, while the Ankylosaurus has its auto-harvest enabled, and the Rockdrakes and the Achatina are breedable in the game.

The said patch update also brought in balance changes, which includes one for the Bloodstalker. According to Dual Shockers, the update reduced its piercing damage from 85% to 65%, while players that are grappled will get a 20 second immunity buff from being webbed by it.

Also, while being webbed by the Bloodseeker, the melee weapons that the players are holding will no longer unequipped.

For the Wyverns, the patch update reduced its Health gained per level by 20% and the armor penetration from the beam attack of its Lightning variant also by 20%, but the right-click attack of its Fire variant was buffed by 30%.

It also prevented its Void variant variant from performing a right-click attack unless mounted by a rider player, and it adjusted the Wyvern's base drag weight in order to match its Crystal variation so that they behave similarly against items such as the Net Ammo that take this into consideration.

It also made the Noglin targetable by the Plant X, and will take reduced damage from same plant entity when it was attached to a player.

The patch update also increased the net6 ammo's durability usage on the Harpoon Gun, as well as its cost per net fired by 25%. It also increased its weight ammo from 0.2 to 2.0.

It also prevented players from being dismounted while riding any creature while they are buffed by a Mammoth war drummer, while it will get a 40% damage mitigation while drumming.

Finally, the patch update for the PC version reduced the range the Shadowmane's stun attack can target horizontally by 20%, as well as the number of targets that it can chain stun when the right-click was held was also reduced from 15 to 7.

Its passive creature armor was reduced from 124 to 80, as well as its armor gained every time it leveled up by 35%.

However, it increased its jump distance after holding the space bar by 20%, as well as the cooldown of its teleport attack from 4.5 seconds to 12 seconds, with each target added increases it by 2 seconds instead of 1 second.

It also increased the length of its immunity buff after a player has been stunned by the creature from 30 seconds to 50 seconds.

On the other hand, the patch update for ARK Survival Evolved's PlayStation 4 version fixed several bugs and issues that might affect the game.

According to PSU, the said update fixed multiple client crash issues, as well as issues in skins where it will not display in the game. It also fixed a bug that prevents players from getting their bionic dinosaur skins.

The said patch update also temporarily prevented a Noglin from gaining torpidity, while it fixed a bug that prevents players from teleporting to the Genesis Part 1 boss fight. It also fixed both a crash issue and an exploit in the game.

As for a separate patch update for the game's PC version, it fixed several exploits, as well as bug that could make TEK Stryders and MEKs not regain health in stasis, and a bug that could lose the durability of the MEK modules when released from cryopods.

It also fixed a bug where a Dedicated Storage Box would ignore any stack modifiers in the server's configuration files, as well as a bug that would cause a Plant Z to no longer heal any dinosaurs, a bug where a Soap could remove any textures from several structures, and a bug where the Shadowmane's cosmetics could not retain their color.