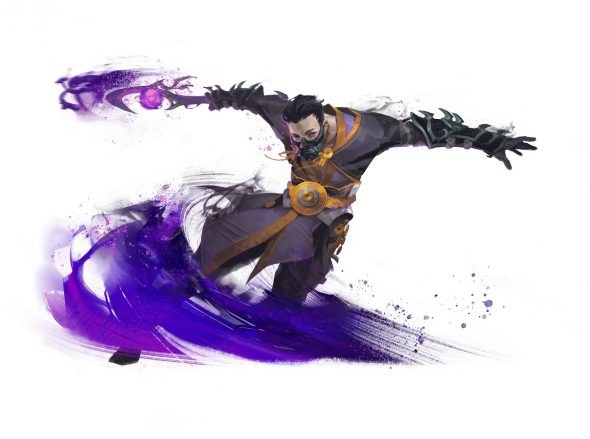 The Specter is one of the last Elite Specializations that players should try during Guild Wars 2: End of Dragons' third beta test.
(Photo: Photo from Guild Wars 2's Website)

The end of the dragons is now finally near as ArenaNet revealed  the last set of three Elite Specializations that will be used in the third beta test for Guild Wars 2: End of Dragons.

Players of the multiplayer online role-playing game can now choose one of the three Elite Specs for the Engineer, Thief, and Ranger classes in the said beta test, which will take place from October 26th to October 30th.

As mentioned earlier, players will choose one of the following Elite Specs that they will use during Guild Wars 2: End of Dragons' third beta test - the Mechanist for the Engineer class, the Specter for the Thief class, and the Untamed for the Ranger class.

The Mechanist, according to Alt Char, uses its mechanical expertise, along with the advanced Canthan technology, to create jade mechs to battle along side with it.

Players can modify the mech's traits and loadout for combat by selecting different specialization attributes, whether it focused on dealing massive damage or become a walking wall that protects them.

They can also activate its ultimate weapon, the Jade Buster Cannon, to wipe out its enemies.

The said Elite Spec can also specialize in various combat roles by unlocking various Signet skills, all of which can affect the course of battle in different ways, while wielding a mace, which is their main weapon and can also use to apply barriers to its allies.

The Specter, according to MMOBomb, wields a scepter, and can cast bolts of shadow magic to its enemies, while tethering itself to allies thanks to its Shadow Shroud, gaining a protective barrier at the cost of it Initiative meter.

Aside for spells, they can use dual attack skills thanks to its weapon set, which are based on a player's available off-hand weapons, as well as they can utilize a number of wells that they can use to shadow step across the map.

The Untamed, according to Gamespace.com, channels the primal forces in their attacks through the bonds of their animal companions using the Unleashed ability, making them take the lead and access to new abilities that can disrupt nearby enemies, while wielding a large hammer.

The said weapon, once influenced by the Unleashed ability, can give its wielder an access to the Cantrips, which can create various defensive and crowd-control effects, making the Untamed switch from a damage dealing attacker to a support providing defender.

Much like the first two beta tests, players that are joining Guild Wars 2: End of Dragons' third beta test will choose one of the aforementioned Elite Specs that they will use to create their own character. They can join said beta test even if they did not pre-order the said game.

According to a post in their website, the characters that they will be creating are temporary, and they will disappear once the beta tests ends. Their progression within the game during the said beta test will also not be saved, so as the information recorded to their account.

According to Dot Esports, ArenaNet will hold the final beta test for the game this coming November 12th, where all of the nine Elite Specs will be used, as well as they will experience first hand how to operate a Siege Turtle.