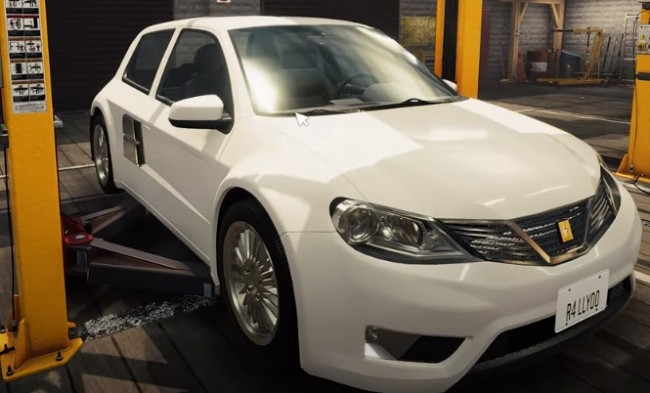 In this Story Order, players will repair an Elenti Callope, or in real life, is the 2003 Renault Clio V6.

According to Kronos80's YouTube video, they must either repair or replace several of its parts, including its rear bumper, as well as they need to replace and refill its oil, coolant fluid, and windshield washer fluid.

They will also notice that once they received the car, they would see that there are parts that are "not discovered."

Once they got the car, they can wash it in the Car Wash, then they will transfer it to the Car Lift in the garage. From there, they will examine it either through Examination Mode or through Additional Tools, which can be accessed in the car's pie menu.

Once they examined the car, they must have "discovered" the following parts - the air filter, the alternator, the engine arm, the belt tensioner, two bottom suspension arms B, two brake discs, two brake pads, four cam gears, the clutch plate, the clutch pressure plate, and the clutch release bearing.

They also must have "discovered" two front axle knuckle covers, the front exhaust section A, two front shock absorber cap, two front springs, the fuel pump, the fuel rail, the gearbox, the idler rollers A and B, two lower suspension arms, the oil filter, and the oil pan.

Once they recognized the "not discovered" car parts, they will drain the remaining oil in car using the Oil Drain machine, then they will drain its coolant using the Drain Tool, which can be accessed through Additional Tools.

Afterwards, they will remove the parts needed to be repaired or replaced. Those that can be repaired will be placed on the Repair Tables, which can be seen in the Workshop.

From there, they will play a minigame, where they need to hit the green tabs in order the part to be fixed. They will repeatedly do this until the part is fully repaired and can be used again.

On the other hand, parts that are impossible to be repaired can be sold for additional Credit and Scrap, and instead replace them by buying new replacement parts.

After that, they either repaint it to a new color in the Paint Booth or they can retain its original color, then they will give it minor adjustments such as tuning the gears in its gearbox.

Once they are finished repairing the whole car, they can now turn it over to the customer, and claim the Credit and XP to end the Story Order.