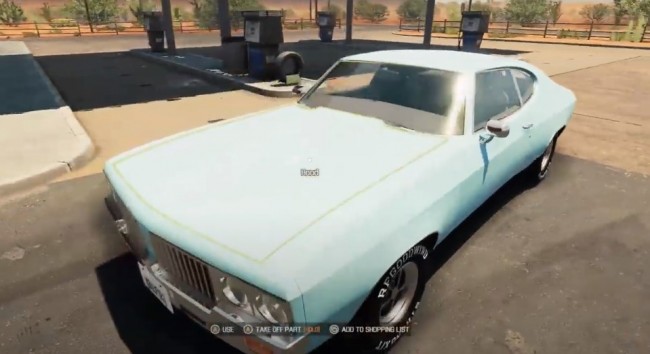 In this Story Order, players must repair an Edgewood Hellcat, or in real life, it is the 1970 Oldsmobile Cutlass Supreme, a mid-size car built by the Oldsmobile division of General Motors, and saw production from 1966 to 1997.

According to Skridger's YouTube video, the car needs to have its oil, brake fluid, and power steering fluid replaced, its windscreen fluid refilled, and have its wheels aligned. It also needs its parts, particularly those that are "not discovered," to be either repaired or replaced with new ones.

Once they received the car, they can wash its exterior and interior in the Car Wash, then transfer it to the Car Lift to examine it through either the Examination Mode or the Additional Tools. Both of these can be accessed in the car's pie menu.

Once they finished examining the car, the following parts should have been discovered - the cam gear, the clutch plate, the crankshaft, three crankshaft bearing caps, two engine heads, the front suspension Crossmember E, the fuel pump, the oil filter, and four rubber bushings.

They should have also "discovered" the A and B serpentine belts, the starter, the timing chain, and sixteen valve push rods.

After the examination, they will drain the remaining oil in the car using the Oil Drain machine, as well as the brake fluid and the power steering fluid using the Drain Tool that can be accessed through the Additional Tools.

Afterwards, they will remove the aforementioned parts that are needed to be repaired or replaced. Those that needed repairs, and need to be reused, must be placed in the Repair Tables that can be seen in the Workshop.

From there, they will need to play a minigame, where they need to hit the green bars in order to repair the parts for a cost of Credits. They must successfully do this in repetition until all of the said parts are fully repaired.

On the other hand, car parts that are impossible be repaired will be replaced with new ones, while they need to sell said parts for additional Credits and Scraps, which they can use for upgrading other parts.

Once they got all the parts needed for the car repair, they will reinstall them in the car one by one through the Part Mount Mode. Afterwards, they will refill it with new oil, brake fluid, and power steering fluid, while refilling its windscreen fluid.

Then, they will transfer the car to the other part of the Garage, where they will realign its wheels in order to recalibrate them.

Once they fulfilled every task for the car repair, they will return the car to the customer, and claim the Credits and XP in order to end the Story Order.