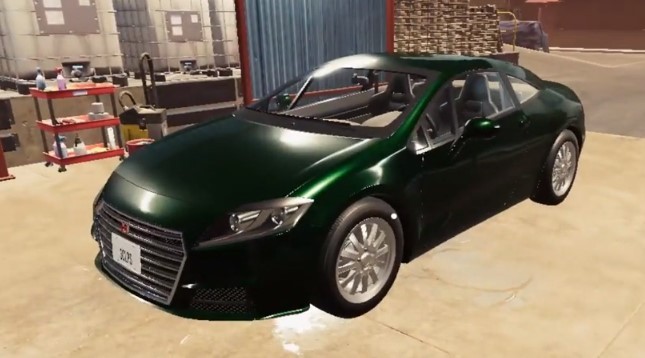 In this Story Order, players of the real-life car mechanic simulator will repair a Hinata Moon Mk 2, or in real life, it is the 2009 Mitsubishi Eclipse.

According to Kronos80's YouTube video, they must repair the car, especially its parts that are "not discovered," as well they need to replace its oil, and have its wheels realigned.

Once they have received the car, they will need to clean its body and interior in the Car Wash, them they will transfer it to the Car Lift in their Garage. From there, they will examine it either through Examination Mode or through Additional Tools, both of which can be accessible through the car's pie menu.

Once they have examined the car, they need to either repair or replace two camshafts, a clutch plate, a clutch pressure plate, a crankshaft, an ECU type A, a flywheel, a fuel filter, a fuel pump, a fuel rail DI, a fuel tank, two type B medium fuses, an oil filter, an oil pan, four piston rings, and three pistons with conrod.

They also need to repair or restore a radiator housing fan, both the type A and B relays, four spark plugs, a starter, a timing belt, and an ABS pump.

Once they recognized the "not discovered" parts, they will drain its remaining oil using the Oil Drain machine, then its other remaining fluids like the brake fluid, coolant, power steering fluid, and windshield washer fluid using the Drain Tool.

Afterwards, they need to temporarily remove the aforementioned parts in order to repair or replace them.

Those that can be repaired will be placed in Repair Tables, which can be seen in the Workshop. From there, they will play a minigame, where they will need to hit the green tabs in order to repair the said parts. They must repeat this process until those parts are completely repaired.

On the other hand, parts that are impossible to be repaired will be replaced with new ones, while the said parts can be sold for additional Credits and Scraps, which they can use to upgrade other parts.

Once they got the parts repaired or restored, they will reinstall them again in the car, then they will refill it with a brand new oil, then its other fluids.

Afterwards, they will go to the Test Path room in their Garage to realign its wheels. In order to do so, they need to adjust the angles of each wheel until the lines that they are moving will be turned to green.

Once they finished calibrating the car, they can turnover it to the customer, claim the Credits and XP, and end the Story Order.