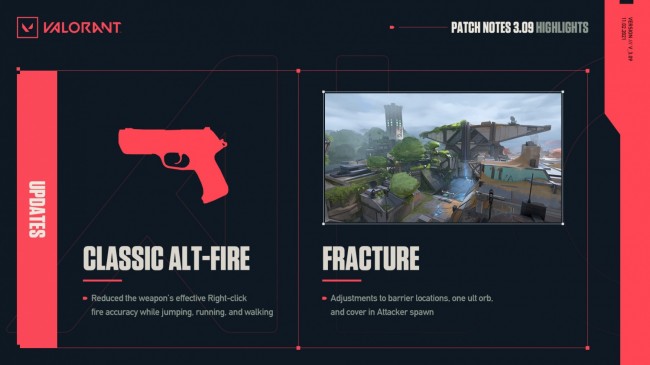 After months of waiting and teasers, Valorant has now moved on towards its Reflection: Act III, and during this transition, the first-person shooting game received its Patch 3.09 Update.

The said patch update will bring in a new Battle Pass, both Free and Premium, for players to accomplish, as well as balance changes to several of its elements, and fixes to several issues that can affect the game once they are not addressed.

One of the changes that will be initiated in Valorant thanks to its Patch 3.09 Update is the balance tweaks for the Classic's alt-fire.

Adjustments to the Classic right-click and a few updates for Fracture are here to go along with the start of VALORANT Act III. Read those and more in Patch Notes 3.09: https://t.co/lx7KsLw3jl pic.twitter.com/3fhCLiSduj

According to the patch notes that was posted in the game's website, its firing error while walking, running, and jumping is reduced from .05 to .6, from .2 to 1.3, and from 1.1 to 2.1, respectfully.

According to Riot Games, the developers of the game, the said handgun has been over-performing in matches in terms of close to mid-range encounters, especially when it was used while on the move or while jumping.

With these changes, it will narrow down to its intended role - to be used only in close ranges.

Aside from the Classic handgun, the Fracture map also got changes courtesy of the patch update. According to Dot Esports, the Attacker barrier in the B Arcade will now be shifted towards the Attacker side of the Bridge, allowing the defenders to easily contest the area.

On the other hand, the Defender barrier at the A Rope is now moved up to the of the ropes in order to make the Sentinel Agents to prepare easier.

The patch update also shifted the Ult Orb in the A Hall into more neutral space, making it less favorable for the Attackers.

Also, a new piece of cover in the Attacker spawn area is now added to break the long sightline from the Hall entrance to the B Main. This will relieve pressure from the Attackers when the Defenders are flanking fast.

The Patch 3.09 Update also brought in other changes to Valorant, including its features that are focused on its competitive Esports element.

According to Gamepur, observers, particularly those who are using gamepad controllers, are no longer locked out of the X and Y axes when speeding up using the right bumper.

The Patch 3.09 Update, according to Dexerto, also fixed the jittery movement that could happen if when players are stopping or changing direction while using the zipline or the ropes.

It also fixed a bug that caused the default Act Rank badges to display on the Unrated game loading screens.

Finally, the patch update also fixed the issues on several of the game's Agents. Because of the said update, Cypher can now no longer place a Spycam on a door in the Breeze map in order to destroy or see through it when it is lowered. It also fixed any random spots within the same area where he could not install it.