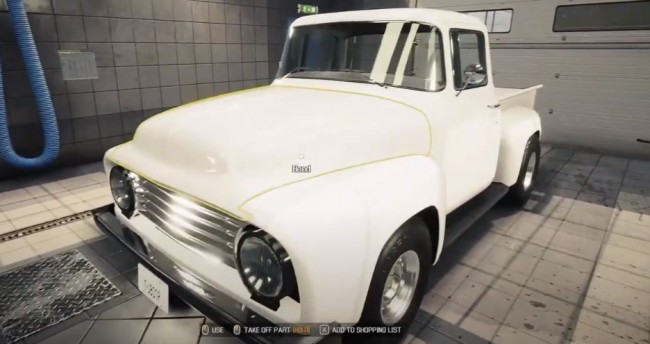 In this Story Order, players must repair a Salem 1500, or in real life, it is the Ford F-100 mini-truck. According to OfficialMisua's YouTube video, they must repair its engine, as well as other parts that are "not discovered."

They will also need to change its oil and its other fluids like the brake fluid, coolant, power steering fluid, and windshield washer fluid, as well as repair its body kit and lights, and spray it with the original factory color. They must also align its headlamp and wheels.

Once they got the vehicle, they must first wash its body and interior in the Car Wash before transferring it to the Car Lift.

Once it is inside the Garage, they must examine its parts to know those that are "not discovered" through either the Examination Mode or the Additional Tools, both of which can be accessed in the car's pie menu.

Then, before disassembling the car complete, they must drain the remaining oil and other fluids using the Oil Drain machine and the Drain Tool, respectively, then they can proceed dismantling the car, including the engine, wheels, braking system and suspension, body kit and doors, lights, and interior.

Once all of the parts have been removed and what is left is the body frame, they will repair it using the Wielding Machine, then they will also repair those parts that still can be used in this repair project using the Repair Tables that are in the Workshop.

In order to repair those parts, they must play a minigame, where they need to hit the green bar with a correct timing until the said parts are repaired. They must continue the process until all of the said parts are completely fixed.

On the other hand, those parts that are impossible to be repaired need to be replaced with new Replacement Parts, and then sell said parts for additional Credits and Scraps.

Once they got the parts repaired or replaced, they can now reassemble the car, starting with the engine. To rebuild it, they need the alternator, two carburetors, two clips, a crankshaft pulley, an engine head, an engine head cover, an exhaust manifold, a front exhaust pipe, an ignition distributor cap and rotor, and ignition wires.

They must also need an intake manifold, an oil filter, four piston with conrod, along with its rings, a power steering pump, a radiator fan, eight rocker arms, a round air filter, with its base and cover, the A and B serpentine belt, four spark plugs, a timing chain and cover, eight valve push rods, a water pump, and a water pump pulley.

On the other hand, they will replace the left headlight B, the left side mirror, the left taillight B, and the right headlight B with newer ones.

Once they got the said parts, they will reinstall it to the car, along with other repaired or restored ones, including those for the wheels, braking system, and suspension. Then, they will refill it with a new batch of oil and other fluids.

Once they are recalibrated, they can now, take it over to the customer, retrieve the Credits and XP, and end the Story Order.