'Age of Empires 4' Feudal Age Build Older Guide: How to Get into this Age Faster, What Landmarks Required for Every Civilization, and More 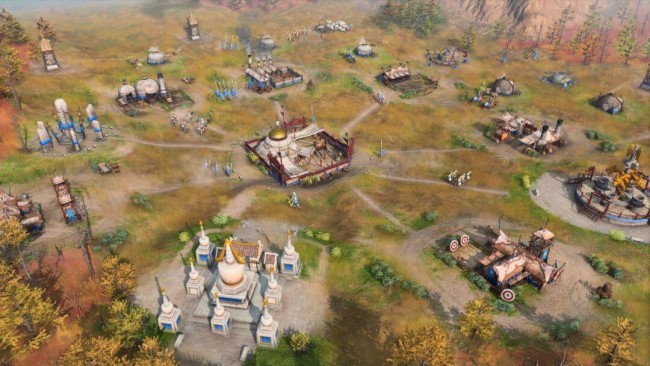 In Age of Empire IV, players will race to reach an Advancement Age in order to get bonuses, including more buildings, units and research tech, as well as to add a higher advantage against their opponents, especially in terms of their empire growth and military might.

The game itself have three Progressive Ages, each has its own cost of resources and build time for the Landmarks needed for every Civilization, as well what bonuses they get after advancing towards said Ages.

They will only need only one Landmark to advance, however several Civilizations had their own exemptions.

How to Get to the Feudal Ages Fast

One of the three Ages in the game is the Feudal Ages, which will be unlocked in order for players to advance from the Dark Ages, the staring Age in Age of Empire IV. This age will not only unlock new buildings and Research Tech, but also unlock a Civilization's basic Military units.

READ ALSO: 'Age of Empires 4' Guide: List of Civilizations Playable, How to Play Them

According to GameSkinny.com, they need to gather 400 Food and 200 Gold in order to build a Landmark, which will take three minutes and ten seconds for the Villagers to do so.

If they want to progress to this Age faster, according to PC Gamer, they need to focus first on growing their population in order to gain more Villagers that will gather said resources and build said Landmarks.

Ideally, they need at least seven Villagers to gather Sheep, a herdable animal in the game that will be essential in the early game as it can maintain Food, and Villager, production.

Meanwhile, they will also send in one more Villager to build Houses, which is already available during the Dark Ages.

This structure will expand the Population count, which is important in order to know how many Villagers, Special Units, and Military Units are active.

They need to make at least fifteen Villagers to not just gather Resources, but also act as workers to build the Landmarks needed once they gathered the aforementioned required amount of Food and Wood, as well as other essential buildings.

Once they built the first required Landmark, according to SegmentNext, they need to start building on Houses, and gather more Wood, as well as Food and Gold, in order to prepare for the progression towards the next Age.

As mentioned earlier, each of the Civilizations that is playable in Age of Empires IV have at least one Landmark that are required to be built in order to progress from one Age to the other.

For example, they need to choose of the two Landmarks in order to advance to Feudal Ages from the Dark Ages.

Each of these Landmarks have their own bonuses as well that players can use, so they need to choose wisely.

For example, the English's Military Landmark, the Council Hall, according to Gameskinny.com, can produce Longbowmen at 100% speed and also contains upgrades for the said unit.

The Abbey of the Kings, their Religious Landmark, will heal any nearby ally units that are out of combat by +4 every 1.5 seconds.

The School of Cavalry, French's Military Landmark, will act as a Stable, producing its mounted units 20% faster, while its Economic Landmark, the Chamber of Commerce, will act as a Market, making all traders and trade ships return 30% more resources to any Market or Dock.

The Holy Roman Empire has its Meinwerk Palace, their Military Landmark, which will act like a Blacksmith that players can access to upgrade their Military Units, but they will cost 25% cheaper, while the Aachen Chapel, their Religious Landmark, will inspire units that are in its large radius as long a Prelate is garrisoned there.

On the other hand, there are Civilizations that have its exceptions in terms of their Landmarks. Those that are controlling the Chinese in the game can build any Landmark that they did not use to advance to the next Age.

Which means that if they choose the Barbarican of the Sun, their Defensive Landmark, to advance towards the Feudal Age, they can also build their Economic Landmark, the Imperial Academy, even if the Progression is done.

On the other hand, the Abbassid Dynasty only needs its House of Wisdom Landmark to advance an Age, as those who controls them will build its four different wings, the Economic, the Military, the Culture, and the Trade wings, each has its bonuses for every Age they lead to.