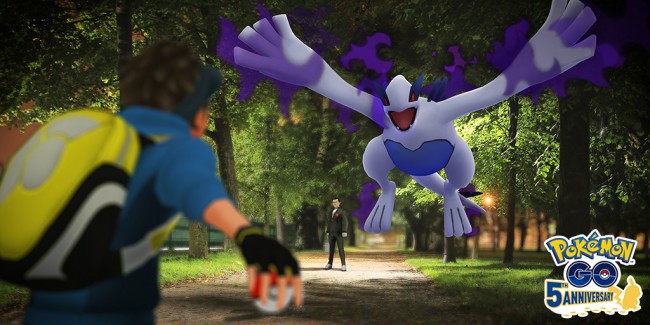 Giovanni is back in Pokemon Go, and the Team Go Rocket boss is not alone as he brought in Shadow Lugia for those Trainers who want to stop him in his tracks, that is if they could find him first.

As part of the second part of the game's "Festival of Light" entitled "A Looming Shadow," and as a continuation of its Season of Mischief Story, according to Sportskeeda, Trainers will have the opportunity to face both Giovanni and his Pokemon team, including Shadow Lugia, after accomplishing a Special Research Task.

How to Find Giovanni

In order to seek out the Team Go Rocket Boss in Pokemon Go, according to Polygon, Trainers must finish the Misunderstood Mischief Special Research Task, which is a 16-step Research task in order to catch Hoopa, the Psychic/Ghost-type Mythical Pokemon.

Giovanni has returned with Shadow Lugia in his grasp! Complete the latest part of the Misunderstood Mischief Special Research to earn a Super Rocket Radar, and use it to save Shadow Lugia from Giovanni’s clutches! 😈🚀#TeamGORocket pic.twitter.com/wgroLGv4NP

In the fifteenth part of the said Special Research Task, players must defeat five Team Go Rocket grunts in order to obtain the Rocket Radar, while defeating one of its leaders, either Arlo, Cliff, or Sierra, will reward them the Super Rocket Radar.

Once they got the Super Rocket Radar, they will now see Giovanni appearing at any nearby PokeStops, as well as in Team Go Rocket Balloons that will fly over them in the game. Once that they encountered either one of them, they can now face him and his Shadow Lugia.

In order to defeat, and possibly catch, Shadow Lugia, and beat Giovanni, Trainers must now its weakness. Shadow Lugia is a Flying/Psychic-type Legendary Pokemon.

According to the chart provided by Eurogamer, Flying-type Pokemon are vulnerable against Rock, Electric, and Ice-type Pokemon, as well as attacks based on said types.

Aside from Shadow Lugia, according to The Scotsman, Trainers will also face Giovanni's usual Pokemon team, which consists of Persian, and a choice of either Kingler, Rhyperior, or Nidoking.

Nidoking, a Poison/Ground-type, on the other hand, is vulnerable against Ground, Psychic, Water, Grass, and Ice-types.

With these facts alone, Trainers must form a Pokemon team based on these types.

For Kingler, they must either have Torterra (Razor Leaf, Frenzy Plant) or Zapdos (Thunder Shock, Thunderbolt) in their team, while for Rhyperior, they can choose either Excadrill (Mud Shot, Drill Run), Swampert (Mud Shot, Hydro Cannon), or Kyogre (Waterfall, Surf).

On the other hand, in facing Nidoking, they need to have either Stunfisk (Mud Shot, Earthquake), Empoleon (Waterfall, Hydro Cannon), or Alolan Sandslash (Powder Snow, Ice Punch) in their team.

Once they defeated the Team Go Rocket Boss and his Pokemon team, they will receive 1 Lucky Egg, as well as an Absol encounter, 2 Golden Razz Berries, and 40 Houndoom Mega Energies, as well as a total of 6,000 XP, a Dusknoi encounter, 20 Hoopa Candies, and a Star Piece for completing the Special Research Task.