'League of Legends' Challenges Guide: How Does This System Work 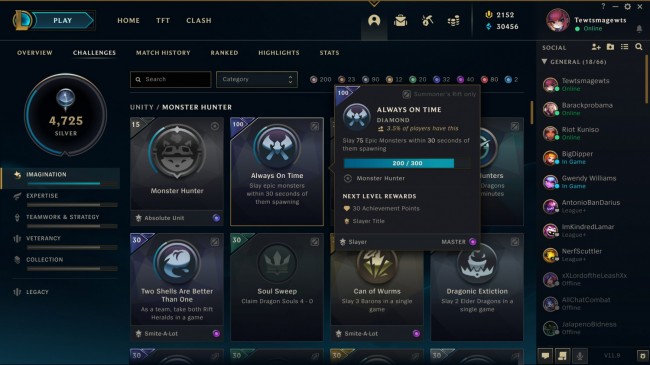 Players can track down the Challenges that they have completed in League of Legends, as well as what Rank they attained, in the special subtab.
(Photo: Photo from League of Legends' Website)

Riot Games announced that a new system for League of Legends, called "Challenges," will be released in the game's Public Beta Environment (PBE).

The said new system will provide a new way of progression in the multiplayer online battle arena game.

This means that all of the players in League of Legends, regardless of what rank they are or where they queue, either in Ranking, "All Random, All Mid," or ARAM, or Clash, can now progress in the game, while allowing them to showcase their achievements.

How does Challenges Work

In the Challenges system, according to a post in the game's website, League of Legends players will take on up to 300 challenges that they need to complete.

These challenges, according to Dot Esports, are split into five categories, namely Imagination, Expertise, Teamwork and Strategy, Veterancy, and Collection.

Under Imagination, players must complete task that will make them come up with different ways in taking down their opponents during a League of Legends match.

This means that they can do things such as killing a Champion while it is still healing in ARAM or killing a number of minions in limited time or faster than that, both of which require skill, timing, and imagination, will reward them with an achievement.

Under Expertise, players will be tested on how skillful they are in the game. Challenges such as winning a game without any deaths need their experience, as well as awareness, to fulfill the requirements before earning an achievement.

Challenges under Teamwork and Strategy required players to be in one with their respective teams in order to clear an objective. Considering that League of Legends is a team sport, clearing these challenges will be easy as long as they work together.

Veterancy Challenges, on the other hand, will more on the quantity than the quality. In these challenges, players need to fulfill a certain number of kills, gold earned, and other stats that they have acquired during their time playing in League of Legends in order to earn the achievements corresponding to it.

Finally, Collection Challenges, like the name itself, will focus on collecting everything in the game, including Champions, Summoner Icons, Skins, and other in-game collectibles.

These Challenges can be tracked down in a special subtab, which can be accessed through the players' League of Legends profile, as well as in profiles from other players.

In the said subtab, they will see a big crystal on the left side, which will indicate their overall progression. Much like a regular League of Legends, they will star in these Challenges in Iron, and they need to complete them in order to earn Achievement Points, and reach towards the highest level, Challenger.

Aside from the Achievement Points, they will also receive a Title corresponding to a Challenge cleared. These Titles, according to ESTNN, will be shown in their Lobby, below their Summoner name, as well as in the loading screen before a match.

Also, because of this feature, the displays for the aforementioned loading screen, as well as post-game, will receive changes. As mentioned earlier, players can see the Titles from each player, as well as how many their Ranks, Challenge Crystals, and Challenge Token acquired.

Finally, after the match, a column where it will show which Challenge each player progressed the most will be added in the Scoreboard, while a panel showing the said Challenges will be appearing in the player's Progression Page.