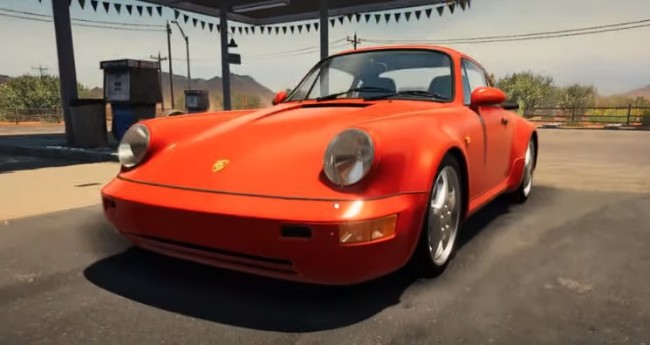 One of the cars included in the Porsche Car Pack is the Porsche 964 RS America, a variant of the Porsche 964, and was manufactured for the American market, especially those who are fans of Porsche's 911 model.

How to Restore a Porsche 964 RS America

Once they have downloaded the DLC car pack, players can now find the Porsche 964 RS America in the game's Car Auction, the Barn, and, in the case of DanGaming's YouTube video, the Junkyard.

Afterwards, they will drain whatever oil that is left inside the car using the Oil Drain machine, then they will drain the rest of the car's fluids, including the brake fluid, the coolant, the power steering fluid, and the windshield washer fluid, using the Drain Tool.

Then, they will disassemble the rest of the car, including the engine, using the Engine Pulley, as well as the gearbox and starter, the exhaust pipes, the wheels, the braking system, the suspension, the body kit, the lights, the windshield and other glass panels, and the interior, until what is left on the Car Lift is the body frame.

From there, they will play a minigame where they need to hit a green tab in order to repair the said part. They need to repeat this process until they got all of the parts fully repaired.

On the other hand, the parts that are impossible to be repaired can be sold instead for additional Credits and Scraps, then they will buy their replacement parts. If there are parts that are missing, they can buy new parts to fill them in.

Once they got the parts repaired or replaced, they can now start reassembling the car itself, starting with its engine. In order to do this in the Engine Stand, they will need the crankshaft first, then the pistons with its rings, and the rod caps.

They will also need the engine block cover, the intake manifolds, the fuel rails, the blower, the throttle, the fuel filter, the air filter, including its cover, base and clips, the flywheel, the clutch plate, the clutch pressure plate, and the clutch release bearing.

Once they rebuild the engine, they will remove it from the Engine Stand, then they will reinstall it inside the car using the Engine Pulley. From there, they will install the oil filter, the reservoirs, the brake servo, the fuse box with its fuses and relays, the ABS pump and module, the gearbox, and the starter.

Then, they will move the car to the Dyno Test room, where they will tune up the gear in its gearbox and perform a dyno test. Once they are satisfied with the results, they can now test drive their own Porsche 964 RS America.