'Elder Scrolls V Skyrim Anniversary Edition' Fishing Guide: How to Unlock, Get Fishing Rod, Where to Fish, and More 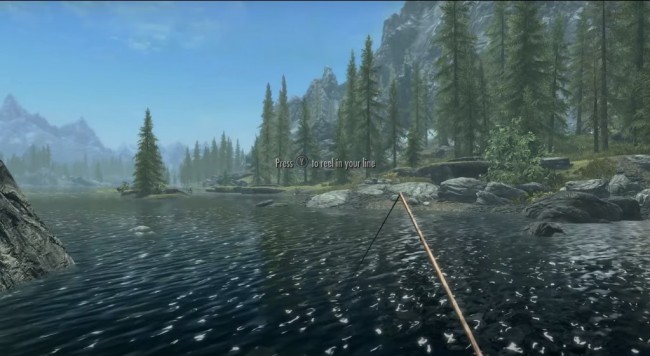 The Elder Scrolls V: Skyrim gave a lot of elements in order to make its players to immerse themselves in the open world role-playing action game. One of those elements is the fishing minigame, which they are allowed to catch fish that they can collect.

The said minigame can now be played in its Anniversary Edition, which it adds new items that they can find in the waters.

How to Fish in Skyrim

In order for them to fish in Skyrim, players must first unlock the minigame. According to Eurogamer, they can now access it once they start their journey in the game. Once they leave Helgen Keep, they can will go to Riverwood to warn the people there that Dragon will attack the village.

From there, they will find the first Fishing Rod, which can be seen on the outskirts of the town before crossing the bridge towards Bleak Falls Barro and Whiterun. They will pick this item, then they will search for "Fishing Supplies."

READ ALSO: 'Elder Scrolls V Skyrim Anniversary Edition' Saints and Seducers DLC Guide: How to Start It, What Players Could Expect, and More

They must keep in mind that in order to catch a fish, they need to equip the Fishing Rod from their inventory, and they must be in the designated spots after interacting the Fishing Supplies.

Once they equipped the Fishing Rod, and they are in the aforementioned fishing spots, which can be accessed in every body of water in Skyrim, such as lakes, rivers, and oceanic shorelines, players can start fishing in the game.

In the minigame, they need to cast the line to the water by pressing the correct input. From there, they would notice that several fishes will move and bite on the said line in unique ways. With correct timing, they will press the aforementioned Action button, then the fish will be automatically pulled in.

The fishes that they will catch during the minigame will be included in their food inventory, which they can cook into a meal that they can eat in the game, especially in its Survival Mode, which is also added in the Anniversary Edition.

If the water is calm, and there are no fish bites the line, they will wait for 24 hours to start fishing in the spot again.

They will also keep in mind that while fishing, they are unable to be attacked by monsters, although they can still be able to hear their growl in there are nearby.

There are many fishes in the waters of Skyrim that players need to catch. According to Gamerant, there are more than twenty kinds of fishes that was newly added in the game aside from those that are present in the base game.

Also included to the fishes that can be caught in the minigame are the Scorpion Fish, the Spadefish, the Tripod Spiderfish, and the Vampire Fish.

With the inclusion of the minigame in Skyrim's Anniversary Edition, items such as rings were also included to those that can be fished out of the waters.

Other items that can "caught" in the Fishing minigame in Skyrim include the Lynea's Amulet of Dibella, the Fang of Haynekhtnamet, the Lucky Fishing Hat, and the Viriya's Charm.