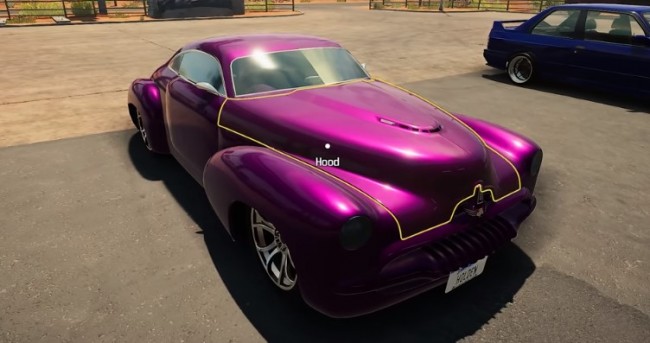 One of those said car mods is the Holden Efijy, an Australian concept car made by Holden, which was inspired after the Holden FJ, a mid-size car which was also manufactured by Holden from 1953 to 1956.

How to Restore a Holden Efijy

Once they downloaded the file for the said car mod, and pasted it in the game's folder, they can now see the Holden Efijy in the Car Salon, the Car Auctions, the Junkyard, and in the case of Alex K's YouTube video, in the Barn.

From there, they will examine for parts that needs to be repaired or replaced either through Examination Mode or through the Additional Tools.

Once they have known the parts, they will drain whatever oil that is remaining using the Oil Drain machine, followed by the other fluids, such as the brake fluid, the coolant, the windshield washer fluid, and the power steering fluid, using the Drain Tool.

Afterwards, they will disassemble the car, including its parts such as the engine using the Engine Pulley, the wheels, the braking system, the suspension, the exhaust pipes, the gearbox and the starter, other internal parts like the battery and fuse box, the body kit, the windshield and other glass panels, and the lights.

Once all that is left on the Car Lift is the body frame, they will repair it using the Wielding Machine, then they will repair the parts that it can still be used in the restoration project using the Repair Tables, all of which can be seen in the Workshop.

From there, they will repair those parts by playing a minigame, where they need to hit the green tabs with the right timing until they are completely fixed.

On the other hand, the parts that are impossible to be repaired need to be replaced with new ones, and instead sold for additional Credit and Scrap.

Once they got the repaired and replaced parts, they can now start reassembling the car, starting with its engine. In order to rebuild in the Engine Stand, they must need the engine block, the crankshaft, the camshaft, the pistons with their rings, the crankshaft bearing caps, the rod caps, the oil pan, and the oil filter.

They will also need the ignition distributor along with its rotor, cap, and clips, the ignition coil, the ignition wires, the cam gear, the timing chain, the timing cover, the water pump and its pulley for the supercharger, the crankshaft pulley, the serpentine belts, and the radiator fan.

Once they are done rebuilding the engine, they will remove it in the Engine Stand, and then they will put it inside the car using the Engine Pulley. Afterwards, they can now reassemble the rest of the car itself.

Then, they can paint their custom colors for the car in the Paint Booth, then they will move it to the Test Path room to realign its wheels and lights. Finally, they will transfer it to the Dyno Test room, where they will tune up the gears in its gearbox and perform a dyno test to the car.

Once they are satisfied with the results, they can now test drive their very own Holden Efijy, which they can either sell it for additional profit, or include it in their in-game car collection.