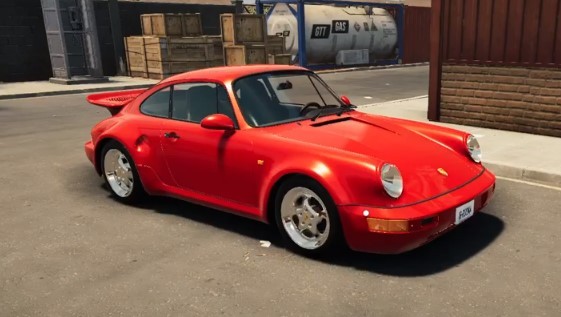 How to Restore the Porsche 911 Turbo S

Once they have downloaded the Porsche Car Pack, they can now find the Porsche 911 Turbo S in the game's Junkyard, the Barn, and in the case of Kestral's YouTube video, the Car Auctions.

Once they have purchased the said car, they will wash its body and interior in the Car Wash, then they will transfer it in the Car Lift, which is located in the Garage.

From there, they will examine the car for parts that are needed to be repaired or replaced either through the Examination Mode or through the Additional Tools.

Once they have examined it, they will drain whatever oil that is remaining inside of it using the Oil Drain machine, as well as the rest of its remaining fluids, such as the brake fluid, the coolant, the power steering fluid, and the windshield washer fluid, using the Drain Tool, which can be accessed through Additional Tools.

Then, they will disassemble the car and get its parts, particularly its engine, its wheels, its braking system, its suspension, its exhaust pipes, its gearbox and starter, its other internal parts like the battery, its fuse box and radiator, its body kit, its lights, its windshield and other glass panels, and its interior.

Once all that is left on the Car Lift is the car's body frame, they will repair it using the Wielding Machine, then they will start repairing the parts they still can use for the restoration project by placing it on the Repair Tables, which can be seen in the Workshop.

On the other hand, those that cannot be repaired are instead be sold for additional Credits and Scraps, while they will buy new replacement ones for the same parts.

Once they got the repaired or replaced parts, they can now start reassembling the car, starting with rebuilding its engine.

They will also need the power steering pump, the timing covers A and B, the alternator, the ignition distributor, along with its rotors, caps and clips, the crankshaft pulley, the engine cylinders, the pipes, the engine heads, the spark plugs, the camshafts, the camshaft bearings, the exhaust manifolds, and the engine head covers.

They will also need the main cover, the intake manifold, the throttle, the mechanical fuel injection unit, including its base, the fan cover, the radiator fan, the turbocharger, the ignition wires, the serpentine belts, the idler rollers, the cam gears, the timing chains, the timing chain shoes, and the front timing cover.

Afterwards, they can now paint it with the custom colors that they want in the Paint Booth, then they transfer it to the Test Path room to realign its lights and wheels. Then, they will move it to the Dyno Test room to tune up the gears in its gearbox and perform a dyno test to it.

Once they are satisfied with the results, they can now test drive their very own Porsche 911 Turbo S.