'Fortnite' Nindo Challenge Guide: How to Join, How to Get Points, What are the Prices 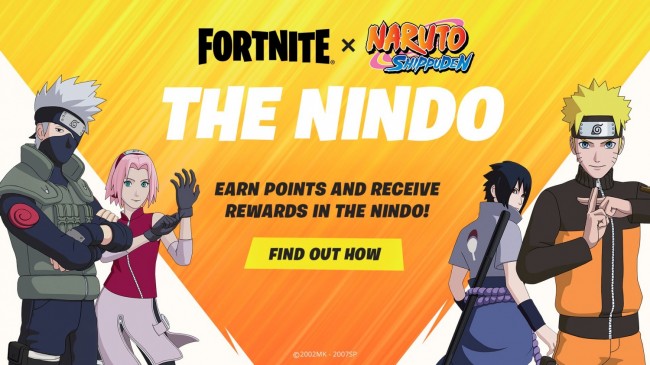 With the collaboration between Fortnite and Naruto now rolling, players of the battle royal shooting game wanted to owe the items related to it, including the Character Skins that are designed after Uzumaki Naruto, Uchiha Sasuke, Haruno Sakura, and Hatake Kakashi.

They also wanted to get their hands on the unique Kurama glider, which is designed after the nine-tailed fox that is trapped inside Naruto ever since his childhood.

The said glider costs V-Bucks when they want to buy it in the game's Item Shop, however they can now owe one for free with Fortnite's "Nindo Challenge," where they will also get emoticons and loading screen, all of which are also free.

Calling all ninjas from around the world, The Nindo challenge is here!

In order for them to participate in the Nindo Challenge, according to PC Gamer, players need to go to the special webpage for the event, which is in Fortnite's website. Afterwards, they need to sign in their in-game credentials.

READ ALSO: 'Fortnite' 'Naruto' Collaboration Character Skin Guide: Price, How to Get, How Do Their Appearances Look Like, Other Cosmetics, and More

Once they are signed in, it will now track their progress, including how many points that they have acquired during the event, as well as sending their rewards after earning a specific number of points to their inbox.

The said webpage will also keep track on what milestones they must do on a specific day. In total, there are five days, each of them has its own milestones, which they need to accomplish while playing the game.

For the first day's milestone, according to Dot Esports, they must score at least 35 eliminations in either Solo, Duos, Trios, or Squads game modes in Fortnite, while for the second day, they need to deal a total of 100 points of damage to an opponent.

For the third day, according to Kaps Quest Gamers' YouTube video, they must catch 60 fishes in several fishing spots in the map using either a Fishing Rod or a Harpoon Gun.

What Are the Prices

There are six prices in the Nindo Challenge that players need to get, each of them can be attained after obtaining a number of points per day.

For Days One to Four of the event, according to The Gamer, they will get the Happy Naruto, Sad Sakura, Angry Sasuke, and Shocked Kakashi emoticons after earning at least one point per each day.

On the final day, they will receive all of the aforementioned emoticons, especially those that they have missed.

If they accomplished the milestone for that day, they will receive the Kurama glider, as well as the Shinobi Teamwork loading screen. If they missed the opportunity to have one, they will also have opportunity to do so in the coming days as long as the event is still on.

They can also still buy the Kurama glider and the Shinobi Teamwork loading screen in the game's Item Shop for 1,200 V-Bucks.

The Nindo Challenge in Fortnite will last until November 21st at 11:59 PM ET.