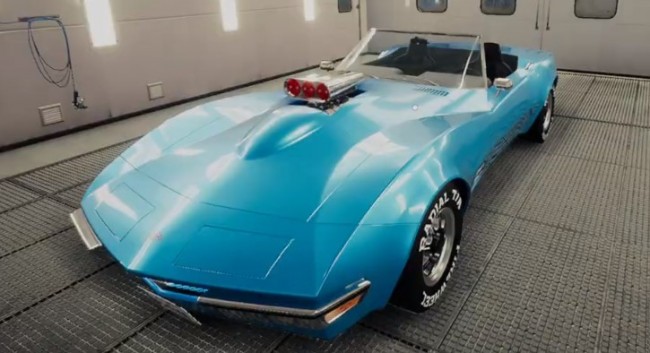 How to Restore the Bolt Reptilia

Once they purchased the Bolt Reptilia in either the Car Auction, the Barn, or in the case of Simulation Gamer's YouTube video, the Junkyard, they will wash its body and interior in the Car Wash, then they will transfer it to the Car Lift in their Garage.

From there, they would notice that the several parts of the car are missing, while some of the are rusty, hence they need to replace the said parts, while salvage those that still can be used in the restoration project.

Before disassembling the whole car, they will drain whatever oil and other fluids like the brake fluid, the coolant, the power steering fluid, and the windshield washer fluid using the Oil Drain machine and the Drain Tool, respectfully.

Afterwards, they can now disassemble the whole car and have the parts needed to be repaired or replaced, including the engine, the wheels, the braking system, the suspension, the gearbox and starter, the exhaust pipes, other internal parts like the radiator and the battery, the body kit, the lights, and the windshield.

Then, they will repair the body kit, which is the only part remaining on the Car Lift after taking away all of the car's parts, using the Wielding Machine, then they will detail its interior again.

Once they got the parts, some of them that can still be repaired will be placed in the Repair Tables, which can be seen in their Workshop, while those that cannot be repaired anymore will be sold instead for additional Credits and Scrap.

After they sold the parts, they will buy replacement ones for them, as well as those parts that are missing. They can also buy Performance Parts if they want to increase the car's tuning percentage.

Once they got the parts repaired or replaced, they can now start reassembling that car, starting with rebuilding its engine. The Bolt Reptalia can house either a V8 1carb OHV, a V8 OHV 6P, a V8 2carb OHV, or a V8 OHV MAG. But for this restoration project, they will rebuild a V8 2carb OHV Supercharged engine.

Once they finished rebuilding the whole engine, they will remove it to the Engine Stand, then reinstall it in the car's engine bay using the Engine Pulley.

Afterwards, they will put in the rest of its internal parts such as the reservoirs for the fluids, the brake pump, the ABS pump and module, the battery, the fuse box along with new relays and fuses, the radiator unit, the gearbox, and the starter.

Then, they can now reassemble the rest of the car's parts, then they will refill it with a new batch of oil, brake fluid, power steering fluid, coolant, and windshield washer fluid.

Once they are done restoring the car, they can now paint it with the color of their choice in the Paint Booth, then they will move it to the Test Path room to realign its wheels and lights. Afterwards, they will transfer it to the Dyno Test room to tune up the gears in its gearbox and perform a dyno test.

Once they are satisfied with the results of the dyno test, they can now test drive their very own Bolt Reptilia, or the 1970 Chevrolet Corvette.