'Pokemon Brilliant Diamond and Shining Pearl' Flower Paradise Guide: How to Access this Area with the Help of a Glitch 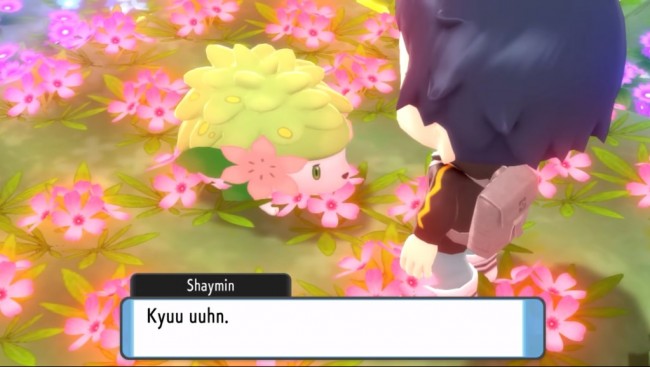 Fans of Pokemon's Generation IV games are familiar to the area known as Flower Paradise. The said area, which is located north of the Seabreak Path and was first appeared in Pokemon Diamond and Pearl, is the home of the Mythical Pokemon, Shaymin.

In order to access it in Diamond and Pearl, players need to have first Oak's Letter, an event-exclusive item which will be given to them through a Mysterious Gift.

Once they got the item, according to iMore, they will head towards the Victory Road, then they will approach an exit on the right, which was blocked by man. From there, they will meet a fellow Trainer, and it will help them in order to access through the tunnel.

Once they are at the end of the path, they will encounter Professor Oak, who is standing beside the Mirror Rock. From there, he will ask them a question. Once they answered it correctly, they will be transported to the said area.

READ ALSO: 'Pokemon Brilliant Diamond and Shining Pearl' Move Tutor Guide: Where to Find Them, Which Pokemon can Learn

This kind of method only works in Diamond and Pearl, and it might not be effective in Pokemon Brilliant Diamond and Shining Pearl, its modern remake for the Nintendo Switch.

However, its fans might have the chance to access the Flower Paradise in the game, even without the item. To do this, they only need to exploit a glitch that is inside the game without any help from mods or hacks.

How to Access the Flower Paradise using a Glitch

To access the Flower Paradise with the help of the glitch inside Brilliant Diamond and Shining Pearl, according to Techraptor, players need to have already defeated the Sinnoh region's Elite Four, as well as they have completed all of the entries in the Sinnoh Dex, the region's PokeDex.

Once they fulfilled said pre-requisites, they will need to head towards the Route 224, where they will encounter a BlackBelt Trainer there. Make sure that they did not fight against the said Trainer, otherwise the said glitch will not work.

Once they went their way past the BlackBelt Trainer, they will battle against the following Trainers - Ruin Maniac Larry, which is on the left of the path; Ace Trainer Jamie, which is behind the tree on the right; and the Dragon Tamer Hayden, which is on the spinner on the first platform further north.

Once they have defeated the three Trainers, they will return to the left side of the BlackBelt Trainer. From there, they will attempt to activate the glitch by going towards the south of him. Before attempting this, they need to save the game in order to make attempts of activating it multiple times.

Afterwards, they will go south from the point where the BlackBelt Trainer is stationed at. Once they are in the spot, they will press the A button in their JoyCon to bring up the text that will remind them to use the move Surf, even if they are on land.

Once they used the move, they will notice that they are "surfing" through the air while the Trainer will not spot them as soon as they face south.

While they are on the air, according to Destructoid, they will move slightly to the right using the JoyCon's analog stick. If they are doing it too fast, they will be demounted.

As they thread towards the said direction, they will "surf" past through the three Trainers that they have faced earlier until they get to the platform where the Dragon Tamer is located.

Next, they will forward towards the large staircase to their north. They will need to position themselves in the top-left corner of the said stairs past the Dragon Tamer Trainer. From there, they will save their game again, then restart their system to reload the said save file.

Once they have reloaded the file, they will notice that they will be one layer higher, which is evident by their avatar's head poking through the stairs. They will position their head again until its half appears to be out of the area. Once again, they will save the game, and reload once more.

Once they used the move, they will get prompt telling them that they are on the Sunbreak Path. From there, they will head east, until they will hit another invisible.

From there, they will battle the Mythical Pokemon until they are given a chance to catch it using an Ultra Ball.

Players need to keep in mind that before doing the said glitch and face Shaymin, they must have Pokemon that are higher than Level 30, considering that the Pokemon they are facing is in that said level.

READ ALSO: 'Pokemon Brilliant Diamond and Shining Pearl' Riolu Guide: Where, How to Get and Evolve into Lucario