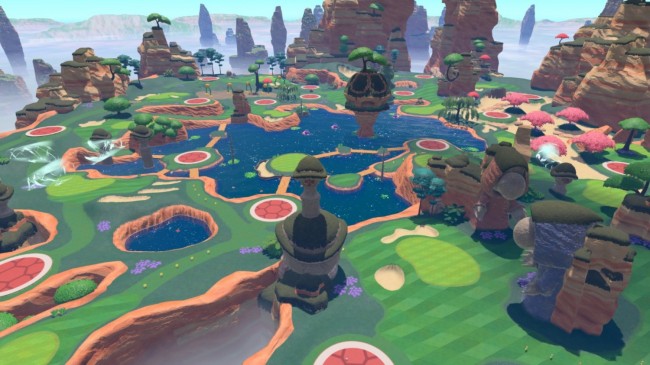 The Shelltop Sanctuary is one of the two new courses that will be included in Mario Golf: Super Rush following its Update 4.0.0.
(Photo: Photo from Nintendo of America's Twitter page, @NintendoAmerica)

Mario Golf: Super Rush has received a massive update in the form of the Update 4.0.0.

The said update has added two new characters in the golfing game's roster, as well as new golf courses and game modes for its players to choose from and play with.

The Update 4.0.0, which will be the final free update for Mario Golf: Super Rush, also brought in balance adjustments and fixes to the game.

Take the green with newly playable characters Wiggler and Shy Guy, plus enjoy new courses and modes, including the new Target Golf!https://t.co/LqSHDuDJDy pic.twitter.com/RWH10pd4lc

One of the two new characters that was added in Mario Golf: Super Rush is Wiggler, which according to Comicbook, he is a power-type whose gameplay focused on using his long body to send the ball further.

When he uses a Special Shot, or he is attacked, he will become "enraged," powering him up for a certain amount of time, with ball flight distance from his shots made will be increased by 1.1 times.

While playing in "Speed Golf," aside from the distance, his running speed and Special Dash speed will be also increased by 1.25 times. In addition, the said Special Dash will change from a straight shot to one that can send out a shockwave once it hits the ground.

His Special Shot, once it hits the ground, will blow away several golf balls that are in the radius from the point of impact.

Another additional character that will be included in Mario Golf: Super Rush courtesy of the Update 4.0.0 is the Shy Guy, which is a well-balanced character that can be easily used in any situation.

His Special Dash will make him summon Fly Guys to help him fly in the sky, which can end by either a press of a button or when the gauge for this move runs out, while his Special Shot will also blow away the golf balls around its point of impact after hitting the ground.

Two new gold courses are also included in the game courtesy of the said update. These include the Shelltop Sanctuary, which according to Nintendo Life, is a short golf course that has a lot of Cheep Cheeps that are flying above the sky, and has 18 holes, all of which are being Par 3.

The location of the green in the said golf course can also change after players switch its difficulty from Amateur to Pro, and vice versa.

Another new golf course that was added in the game is the All-Star Summit, which has different designs of the green and bunkers that players can use to employ their different strategies.

The brick blocks in the said course can be broken by hitting with a shot or doing a special dash. These blocks, once destroyed, can give them Star Coins that can refill their Energy.

They can also traverse on the top of the course's clouds in order to travel to the opposite banks or acquiring more Star Coins for a full energy charge.

Target Golf, according to Twinfinite, will allow players, especially those that do not know the detailed rules of the game, to play with just tee shot.

In the said game mode, they will take turns in shooting a total of five balls at the target. The closer the ball is on the center of the target, the higher the score they will get.

The player who got the highest number of accumulated points after all of the five balls where shot will be the winner.

On the other hand, in One-On, One-Putt, which is a Solo Score Challenge, they will need to hit the green on their first swing, before putting it into a cup during their second swing.

The said game mode is available on the New Donk City and the Shelltop Sanctuary courses, where the latter will have a special difficulty level that will require them to use a special club.