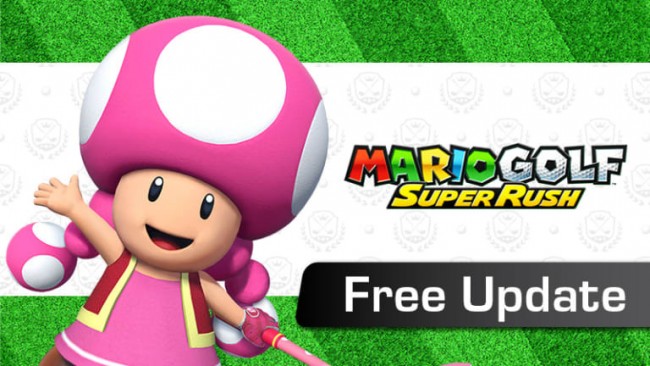 Months after it was launched in the last Electronic Entertainment Expo (E3) 2021 followed by its official release, Mario Golf: Super Rush received its first update. The said update will give brander new content, including downloadable content (DLC) ones, such as a new character and a new golf course.

Nintendo first announced said update in a Twitter post hours before the release of the said update, revealing the details regarding it.

One of the new additions that will be included in Mario Golf: Super Rush is the inclusion of Toadette in the game's roaster as a DLC character that will be rolled out during the update.

The free #MarioGolf: Super Rush update is available now! Jump into the new Ranked Match mode or try your shot at New Donk City with the new character, Toadette!https://t.co/UaIoooiSrj pic.twitter.com/9scczPbNIz

According to Comicbook, she has the highest control rating, yet also has the lowest power. Players can use her speed and accuracy coming from her high swing control to get their winning shot.

Her Super Pickax Stinger Special shot can tear through the course, blasting away the golf balls from her opponents in its path. Her Turnip-Toss Dash can make her run quickly past them while throwing around turnips.

Another addition is the new map called "New Donk City," which is a stage from "Super Mario Odyssey." The said new map is a short golfing course with 18 holes, all of which are rated Par 3.

Players can pull off unique strategies for their shots by using its city-esque surroundings that are full of walls and buildings. They can also change the difficulty of the said course from "Amateur" to "Pro," making the tees and greens of all of the 18 holes will be completely different.

According to Nintendo Life, the players can now improve their global ranking based on their accumulated monthly match points that came from their match results. In Ranked Matches, they will be automatically matched with their opponents that has the same location and global ranking.

If there are few opponents available, the game will match them up to those that has a different rank, but those who are have higher ranks will be placed behind other players during the tee-off. If a player beats a higher ranked opponent/s, a bonus will be awarded and added to its monthly match points.

These Ranked Matches will be split into two, Button Controls and Motion Controls, both of which has two categories, Standard Golf, which is just an ordinary golf game, and Speed Golf, which is a race towards the hole.

Players who will achieve the rank "A-"or higher each month will be able to use a character with a special appearance as a bonus, while those who achieved the same ranking or higher in any one of the categories during this month will receive a Red Yoshi, Blue Yoshi, and Yellow Yoshi as a bonus.

The Version 2.0.0 for the Mario Golf: Super Rush is now available for download for the Nintendo Switch.

According to a post in the Nintendo website, both Toadette and the New Donk City course will be available for free once the update for the game will be downloaded in the said console.

READ ALSO: Nintendo's 'Game Builder Garage': What Tools Are We Expecting in This Game Creator System