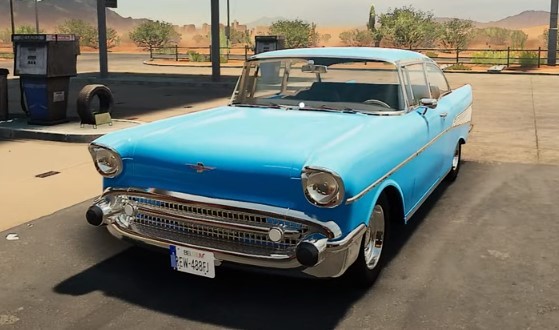 One of those cars is the Delray Custom, or in real life, is the Chevrolet Bel Air full-size muscle car. The one that is present in the game is the Second Generation one, which was produced by Chevrolet from 1954 to 1957.

How to Restore a Delray Custom

According to Boblas' YouTube video, the Delray Custom can be found in the game's Barn, Car Auctions, and in the Junkyard. Once they have purchased the said car, they will wash its body and interior in the car Wash, then they will transfer it to one of the Car Lifts in the Garage.

From there, they will drain whatever oil and other fluids like the brake fluid, the power steering fluid, the coolant, and the windshield washer fluid that are remaining inside using the Oil Drain machine and the Drain Tool, respectfully.

Afterwards, they will disassemble the car, and get the parts that are needed to be repaired or replaced, until what is remaining on the Car Lift is the body frame.

These include the engine and other internal parts like the battery, radiator, fuse box and reservoirs, the wheels, the braking system, the suspension, the exhaust pipes, the gearbox and starter, the body kit, the lights, the windshield and other glass panels, and the interior.

From there, they will play a minigame where they need to hit the green tabs in order to fix the said parts. They will continue doing this until they are completely repaired.

On the other hand, those that are impossible to be repaired can be sold instead for additional Credits and Scrap, and they will be replaced with new ones.

They will also need the engine heads, the exhaust manifolds, the spark plugs, the valve push rods, the rocker arms, the engine head covers, the intake manifold, the carburetor, the air filter unit, including its base and cover, the fuel filter, the ignition distributor, along with its rotor, cap and clips, and the ignition wires.

Once they finished rebuilding the engine, they will remove it from the Engine Stand, then they will install it to the car's engine bay using the Engine Pulley.

Afterwards, they will also install the rest of the internal parts such as the battery, the fuse box with the new relays and fuses, the radiator, the reservoirs, the brake servo, the gearbox, and the starter.

Then, they will reassemble the rest of the car before refilling it with a new batch of oil and other fluids. Afterwards, they will paint its body with the color of their choice in the Paint Booth.

Then, they will move it to the Test Path room, where they will realign its lights and wheels, as well as testing its newly installed braking system. After that, they will transfer it to the Dyno Test room to tune up the gears in its gearbox and perform a dyno test.

Once they are satisfied with the results, they can now test drive their very own Delray Custom full-size muscle car.