LoL:Wild Rift's Patch 2.3 Update Guide: How to Unlock Irelia and Riven for Free in the 'Broken Blades' Event 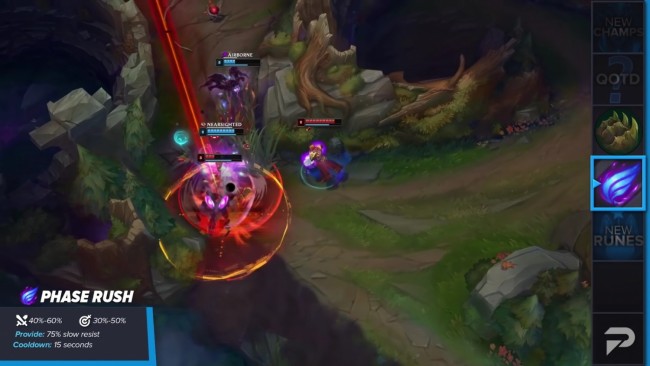 A screenshot showcasing the "Phase Rush" runes that will be added to the "League of Legends: Wild Rift" as a swap rune once Patch 2.3 Update will be launched on June.
(Photo: Screenshot from ProGuides Wild Rift League of Legends Mobile Tips's "Patch 2.3 PREVIEW - All LEAKED Champions, Runes & Skins! - Wild Rift (LoL Mobile)")

New heroes, new skins, and a new event will be the welcoming treat for the players of League of Legends: Wild Rift as the newest Patch 2.3 Update will be upon the said Multiplayer Online Battle Arena (MOBA) mobile game.

In the recent "/dev diary" from the game's director, Alan "RiotMirross" Moore, the incoming patch update will focus on the release of four new champions that will be added in the roster as we as new runes that players will use in their future games.

First up are Riven and Irelia as they are both tied in an event that will be started along with the launch of the patch 2.3 Update. Entitled "The Broken Blades," the event will focus on both Fighter/Assassin-type heroes.

Patch 2.3 is right around the corner, bringing with it new champs, skins, and other juicy updates. Get a peek at what’s coming with game director Alan “RiotMirross” Moore.https://t.co/Dw9FnueEh0

According to Moore, players can choose between the two heroes and accomplish missions regarding the chosen hero. In an article made by Dexerto.com, despite of no other details regarding them that, the missions under "The Broken Blades" will be similar to other missions for events such as the "Masters of the Hunt" event.

The objectives might focus on elements within League of Legends: Wild Rift such as focusing on a specific lane or a specific strength of the champion itself.

Once "The Broken Blades" event launches along the new patch updates, players will accomplish those mission of the path their chosen. Once they do accomplish said missions, they can obtain things like accessories or a Champion pose.

But at the end of the said quest, the champions whom the player chooses will be on its possession for free. Aside from the mentioned rewards, players will also obtain a total of 200 Poro Coins and 1200 Blue Motes once they completed both champions' bonus missions.

According to Moore, both Riven and Irelia were adjusted for their transition from the PC to mobile. In an article made by AppTrigger.com, Moore admitied that while working for the mobile port for Irelia, they noticed that one of her skills, "Blade Surge," will be a hard task.

He said in the "/dev diaries" that dashing towards multiple minions who are low in health while doing the "Blade Surge" ability "was not an easy thing to do."

Because of this, Moore and the rest of the developers at Riot deside to adjust Irelia and the aforementioned skill, now became more easy as the skill will prioritize marked or low health targets while continuing tapping "Blade Surge" will continue to prioritize heroes.

Aside from that, nothing has changed during their transition towards the mobile game. Riven will be the same hero as she is in the PC version since her release in 2011.

Other characters that will join the party during the patch update is Lucian and Senna. Both marksmen, according to an article by Comicbook.com, were slated to be released "later in the patch."

As for the runes that will be appearing in the game post-patch 2.3, the same article also said that the biggest change regarding it was a change of runes. "Kleptomancy," a passive spell where an attack was used against a champion, you gain 5 gold, or occasionally, a consumable item, will be replaced with "Phase Rush," a passive spell where it generates stacks against enemy champions if you inflict damage via basic attacks, abilities, item effects, and summoner spells, as well as applying crowd control and damage over time effects.

Other rune changes during the patch update include swapping the Regeneration, Spirit Walker, and Backbone runes to Second Wind, Bone Plating, and Adaptive Carapace runes.

"Not every rune needs to be popular, but Kleptomancy has been far below the pick rate of other keystones," said Riot game designer Mike "RogueFool" Breese in a May 26 dev blog.

The Patch 2.3 Update of League of Legends: Wild Rift is set to launch this coming June 1st.