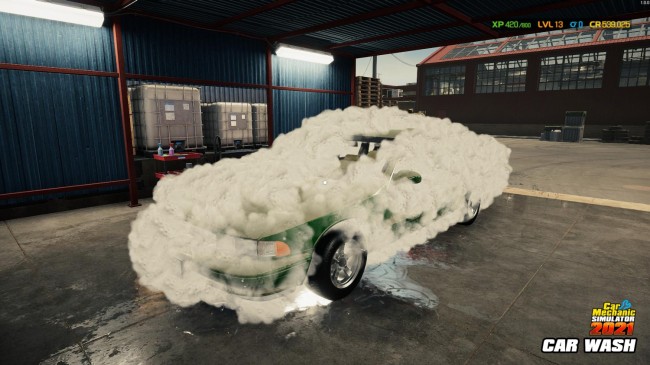 A new feature in Car Mechanic Simulator 2021, the Car Wash lets players to wash the car that they got from either the Junkyard, the Barn, or in Car Auctions.
(Photo: Photo from Steam Store Website)

In Car Mechanic Simulator 2021, players can repair and restore one of the 80 cars that are either already available in the game or as part of its downloadable content (DLC) car packs.

Most of these cars are tend to be either found at the Junkyard, the Barn, or bought in Kowalski Salvage Auction, and when they received it, they will notice that the car is filled with dust and dirt.

Luckily, they can remove them by moving the said car to the Car Wash, a new feature in the real-life car mechanic simulation game, and wash the said car before starting to repair or restore it.

The said area, according to Gameplay.tips, can be unlocked by just paying 1750 Credits, which means grinding in the game, including selling several scrapped parts and restored cars, is necessary.

READ ALSO: 'Car Mechanic Simulator 2021' Junkyard Tips: How to Find Parts, Buy Cars in the Area that are Near-Working Condition

However, players are wondering if the said process will add value to the car, especially after repairing it for a Story Order or selling it after a restoration.

Does the Car Wash Beneficial?

In his YouTube video, Hybridsteel stated washing the car in the Car Wash has its own advantages and disadvantages. For one, washing a car in the game does not change the Profit that the players will earn from the car once it was sold.

He demonstrated said theory by first recharging the car battery in order to increase its value, from 45 Credits to 243 Credits after installing the charged car battery. After washing the car that has the charged battery, its value is still 243 Credits, which means that it did not change even after the said wash.

However, if they "washed" its interior using the Interior Detailing Toolkit, which can cost Credits, its value will increase along with the condition of the car's cabin.

The good side of washing the car, however, is not only that players will washed it until it is clean, but also they will see the true state of the car after it.

Once it was washed, they would know the condition of its body and the other parts, if it is rusty or not. It will also make them work a bit easier, especially in repairs.

This is the same case with painting a car, especially after repairing or restoring it. According to Riot Bits, painting a car will also not value to the car, however, it might add additional aesthetics and charm to it.

What to Do to Increase a Car's Value

The Car Wash will not add more value in the car, however there are other ways in Car Mechanic Simulator 2021 to make the car more profitable.

Aside from the aforementioned Interior Detailing Kit, other tools such as the Wielding Machine (for repairing the body frame) and the aforementioned Battery Charger can also increase the value of the car, however the former may cost them Credits.

Installing repaired or brand new parts may also increase the car's profitability, especially if the parts that will be installed inside the engine are Performance Parts. Players must keep in mind that this method will also cost money.

Just like the aforementioned Interior Detailing, doing these will also improve the car's conditions, making it more profitable once it is sold after repairing or restoring it.