'Apex Legends' Twitch Drops: How to Get your Free Fan-Made Loading Screens via Twitch Drops 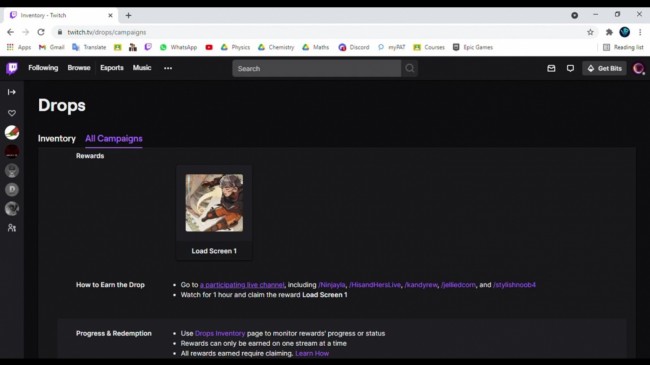 In this screenshot, a content creator received one of the Apex Legends loading screen Twitch Drops, which is available once for every seven days.
(Photo: Screenshot from VirusBudhi12's "HOW TO COLLECT TWITCH DROPS FOR APEX LEGENDS||APEX LEGENDS TWITCH DROPS||#twitchdrops")

Players of "Apex Legends" will experience the fan community's love to the game as they can get a fan-made loading screens for free through Twitch Drops as part of the game's Chapter 9: Legacy update.

The said initiative was part of the "Community Created," a move from the people behind the game where they will partner alongside artists from the community and commissioning them to generate in-game content like loading screens and weapon charms.

According to an article by EssentiallySports.com, selected artists from the game's fan community will provide these loading screens, where players can obtain it via Twitch Drops.

Starting today, tune in to Apex Legends streamers to earn six different Community Created loading screens via Twitch Drops! Read the blog below for more info on how to set up your account to start earning:

This feature was utilized by the video game streaming site, Twitch, to create a fun atmosphere for their viewers in getting in-game loot while watching their favorite content creators in the site.

In the same article, EssentiallySports.com said that Apex Legends also selected several streamers to help them for this event.

In order to get your hands on those loading screens, you must need to have both your Twitch and EA Accounts linked while watching the game's streams.

According to the blog posted in the game's website, you need to make sure that any of your game accounts, whether if it is your Gamertag, Nintendo Switch Online Account, or PlayStation Network Account, is linked into your EA Account.

Once you are done, you may watch the streamers that the game designated for the said drops. The drops are scheduled, which is also posted in the same blog. According to Dot ESports, one of every fan-made loading screens will be available each week, starting from June 1st to August 3rd.

Also, according to its developers, they will post on their Twitter page which streamer will be scheduled to be watched in order to retrieve the loading screen, so make sure that you follow them at @PlayApex.

They also said that you need to watch these Twitch streamers for one consecutive hour. Switching between streamers within that hour will not count.

You will see your received loading screen in-game within the 24 hours of the event the next time you log on.

Aside from the loading screens, the same selected artists will also draw a comic based on the game and it will be released on either Thursday or Friday every week for the next ten weeks on their Twitter page. According to EssentiallySports.com, the first comic, "The Legacy Antigen - Prologue," is now already available.