‘Ratchet & Clank: Rift Apart’ RYNO 8 Spybots' Locations Guide: Where to Find Them ALL to Unlock This Weapon 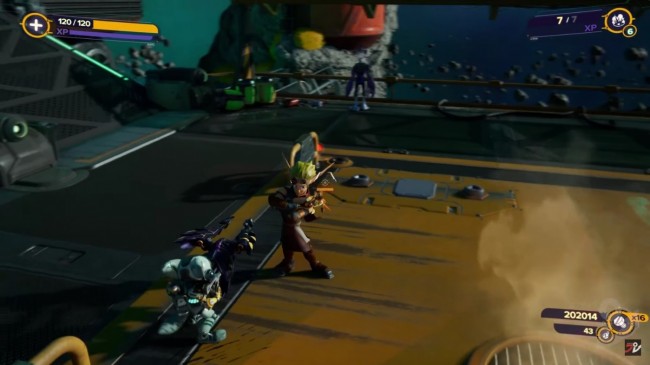 Unlike its predecessor, the RYNO 8 can shoot a devastating portal-like beam that can summon any character from franchises that are playable in any Playstation Console, such as Jak and Daxter.
(Photo: Screenshot from Kakuchopurei's "Ratchet & Clank: Rift Apart - All PlayStation and Insomniac Easter Eggs")

Since its formal release in 2002 for the PlayStation 2, Ratchet & Clank have been the witness to a plethora of weapons that wreak havoc to the protagonist's enemies, ranging from the signature OmniWrench to the Morph-o-Ray that converts enemies them into chickens.

Several new and revamped weapons came after as the series evolves throughout the years. But one that is certain - the strongest weapon of them all is the RYNO, short for "Rip Ya a New One."

This missile launcher was seen in a lot of Ratchet & Clank's reiterations, and it will have a return at the incoming Ratchet & Clank: Rift Apart. But unlike its predecessors, the newest RYNO will not shoot missiles.

That's it for Ratchet, Clank and Rivet! Thanks to you, they've accomplished their mission!

Join our heroes again and try out the RYNO 8 for yourself on June 11th. Don't forget to pre-order #RatchetPS5: https://t.co/9EsXGdv8tM#RatchetPS5Takeover pic.twitter.com/u4b9ke1NCe

Named "RYNO 8," the newest addition to the RYNO family perfectly adds the "ultimate" in the ultimate weapon. This weapon can shoot portal-like laser beams that opens up any alternate dimensions, summoning someone, or something, that came from those dimensions.

But those are not just any alternate dimensions, but rather dimensions that came from different PlayStation games. RYNO 8 itself can summon characters and objects from franchises that were played in the said console.

According to Polygon.com, players can summon the classic boss of the 2002 Ratchet & Clank, the Blargian Snagglebeast to crush their enemies.

Apart from the nostalgia trip, it can also summon Ravager and Thunderjaw from "Horizon Zero Dawn," Jak from "Jak and Daxter," Sly Cooper from "Sly Cooper," and Fizzie, Fizzco's corporate mascot from "Sunset Overdrive."

According to SyFy.com, when Insomniac Games, the developers of the Ratchet & Clank series, teased the said weapon in a Twitter post, the reactions regarding it show that there is still an audience for the game titles that was referenced by the weapon, including Sly Cooper and Sunset Overdrive.

How to Get Your RYNO 8

Players cannot pick up the Ratchet & Clank: Rift Apart's version of DOOM franchise's "BFG" just yet until late in the game's story. The RYNO 8 will be unlocked once you collect several Spybot collectibles that are scattered all over the game.

In a guide made by GamesRadar.com, there are 10 Spybots that you need to collect throughout the game.

The first one is located in the Corson V, when you enter the Nefarious City market place and be introduced to Ms. Zurkon. Follow the objective marker through the factory, and fight enemies along the way. Then you will cross a loading dock where you will defeat additional more enemies.

The first Spybot will be seen sitting on a top of a slide that takes you back down to the marketplace.

The second one was in Sargasso at the end of an optional mission, where you need to help Trudi collect 60 zurpstones. Once you collected it all, you may now have the 2nd Spybot.

The third Spybot collectible is located outside Zurkie's in the Scarstu Debris Field. In order to get it, you must first obtain the Hurlshot first, which you can find in Torren IV. When you have the Hurlshot, go past the door to Zurkie's Bar, and use it to reach the platform in the distance.

The fourth one will be in the same debris field when you accomplish one of the Gold Cup Battleplex challenges.

The fifth one is located in Savali, at the top of the map, slightly to the right side. You will find a series of ledges near a cable with buttons to stand on. Climb those ledges, then jump across to the cave opening with a single Raritanium outcrop outside. The Spybot is chilling on top of a pirate ship.

The sixth one is obtainable through an optional objective on Blizar Prime. From the mining colony, head through the Wasp Cavern until you find Chef Tulio, where she wants you to defeat waves of enemies. Once you defeat them, she will reward you the said Spybot.

The seventh Spybot is located at Molonoth Gulch in Torren IV, where you take the immediate right turn to the magnetic bridge that curves below. From there, you will jump the gap and the Spybot will appear in front of you in Spike's Grotto.

The eighth Spybot is located in Cordelion where you will be exploring in the Kedaro Station. Once you are there, you will go around a wall run then spin a crystal in the Dimensionator to a populated dimension. Run towards the next room, where you found a rift tether on a platform. From there, grab the Spybot.

The ninth one was located on the north-eastern island in Ardolis which you can access via Speetle. Explore the island and you will find the Spybot at the top, near a teleporter.

Once you collected all of the 10 Spybots, go to Ms. Zurkon where you can obtain the RYNO 8 from her for free.

Ratchet & Clank: Rift Apart is available to the Playstation 5.