Microsoft's 'Windows 11' Preview Leak: What Does New OS Look Like, Will it Be Free? 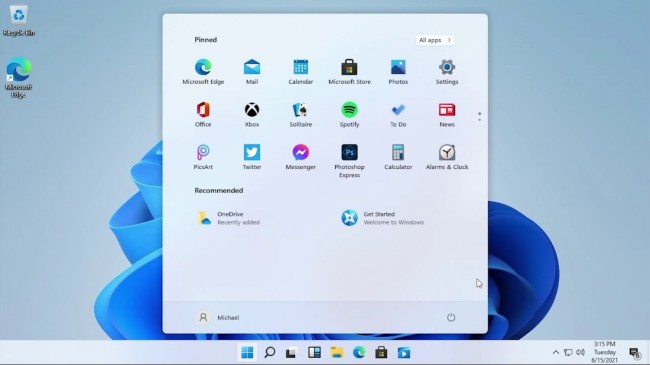 In this screenshot, you will see an organized task bar and Start Bar menus that is in the Windows 11.
(Photo: Screenshot from Michael MJD's "Windows 11 Leaked - Let's Explore It! (Build 21996.1 Overview & Demo)")

Users and supporters of Microsoft and its Windows Operating System (OS) will might not be waiting for the June 24 Livestream Event as screenshots that might reveal the new look of the rumored Windows 11 are leaked online.

According to The Verge, the said screenshots was first leaked through Baidu, a Chinese forum site. In a forum post, the user showed the screenshots containing an Apple Mac-esque taskbar and the usual Windows user interface in the Home screen with the redesigned icons.

Another screenshot shows the System Specifications, which tells the Windows OS version the system is running. It reads "Windows 11 Pro" and it is under the "Windows Feature Experience Pack 321.14700.0.3" bundle with the "21996.1" OS build.

Other screenshots of what supposed to be Windows 11 are also spread like wildfire inside Baidu, including a Setup window where they can install the said Windows OS, including its other versions as according to the screenshot, the rumored Windows 11 has a Home, Education, and Pro Editions.

The Verge said that the interface and the Start menu may look similar to ones that was originally found in Windows 10X, a supposedly new version of the Windows 10 that was made for those devices that uses dual screens, but was eventually scrapped.

The said screenshots were confirmed by The Verge after downloading a copy from a link that was posted in several forum sites and in social media.

According to its writer, Tom Warren, one of the biggest changes that they would see in Windows 11 is the taskbar, which its icons were neatly centered and arranged. Aside from that change, they also cleaned up the tray area and installed a new Start button along with its menu.

According to PCMag.com, the Start menu, which looks like the simplified version of the one that was currently seen in Windows 10 minus the Live Tiles, was simplified to emphasize pinned and recommended apps, as well as commands such as shutting down and restarting the device.

If users don't like the said center placement, they can move the Start button and the taskbar apps to the left-hand side just like the interface in the Windows 10.

The Verge added that Windows 11 will likely look like a refined version of Windows 10 more than a new OS because of the availability of the Dark Mode for the former.

Other cosmetic and functional changes that were made for Windows 11 includes the use of rounded corners in their menus, snap controls that can cascade active windows in the desktop, and a new icon in the task bar -- the Widgets.

According to The Verge, Microsoft is rumored to bring back their Widgets feature for Windows 11.

The Widgets were the updated version of the Microsoft Gadgets that was first featured in Microsoft Vista. This feature gives specialized applications that can be used in the desktop including clocks, calendars, search tools, slide show aiders, and web browsers.

On the other hand, several old-school features like the Control Panel and the Task Manager are still existing in the rumored Windows 11 OS.

However, The Verge clarified that the said leaked Windows 11 OS has not been updated with an overhauled Microsoft Store, a feature that was hinted by the company to come with the mentioned OS.

As for Microsoft, they did not post any comments regarding the leak. However, they still promote the said June 24 Livestream in their recent Tweet in their Windows Twitter page.

Will the New OS Released for Free?

Despite of the leaks that is circling around the web, many people are still eagerly waiting for the announcement from Microsoft within the June 24 Livestream. Along with it is the question if the Windows 11 would be a free OS upgrade or not.

According to Tech Advisor, the new Windows OS will might be costly, however Microsoft might likely to retain the free upgrade option just like the one for Windows 10.

Windows Central then cleared that the company would still formally announce the release date as well as the price of Windows 11.

If the new OS rolls out, many people would buy its copy for a hefty price much like the other Windows OS. However, much like in Windows 10, users will receive free upgrades that will be included in Windows 11.

READ ALSO: 'Safari' Extensions on iOS15 Guide: How to Install, Manage the Extension in your iPhone, iPad