Genshin Impact 'A Thousand Questions with Paimon' Guide: What are the Answers you must Enter 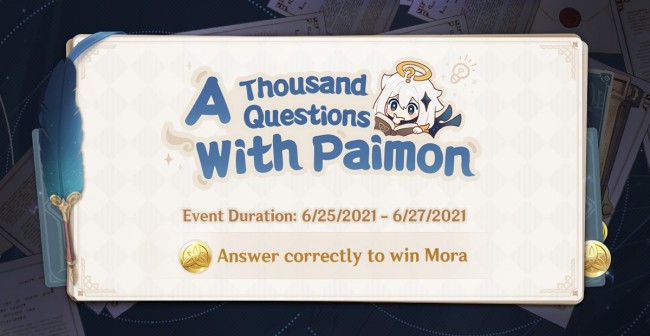 Genshin Impact players need to flex their in-game knowledge as miHoYo, the developers of the massive multiplayer online role-playing game, launches a web event that with a one correct answer can give a player a hefty amount of Mora.

In "A Thousand Questions with Paimon," players will be given a quiz where questions range from basic in-game know-how to in-game general knowledge to trivia regarding the game's lore.

How This Quiz Work

According to MMOBomb.com, Paimon will ask ten multiple choice questions for each day. Each correct answer will give you 5,000 Mora, with a total of 50,000 mora will be collected if a player perfected the said 10 questions.

A new challenge with new goals!

Take part in the Paimon Quiz Event from HoYoLAB each day and answer questions correctly to win Mora!

If an answer is wrong, the player will receive nothing, however they will have multiple attempts to answer these questions, which they can earn by either completing any social or in-game tasks.

The rewards that a player earned in this event will be sent via in-game mail.

According to Sportskeeda, players just need to sign in through the official event page in order to participate to the quiz. They should know that they need log in to the correct server. Once they are in the event page, they will click the "Begin Answering" button.

According to Eastern Mirror, the event will last until June 27th.

Answers to the "Thousand Questions with Paimon" Quiz

Like the name of the event stated, there are 1,000 questions in "A Thousand Questions with Paimon," all of the answers can be seen in the web posts made by miHoYo for the event.

For convenience, this article will show you several questions from that event and its corresponding answers.

Q: Which of the following elements is Boreas not immune to? "Pyro"

Q: Which of the following will not allow you to obtain Shrine of Depth Keys? "Completing a Story Quest"

Q: What is Keqing's title in the Liyue Qixing? "Yuheng"

Q: Which of the following Elemental Resonances can reduce the CD of Elemental Skills? "Impetuous Winds"

Q: How many types of Hydro Mimics can the Oceanid summon in total? "8 types"

Q: Which of the following areas do not contain any Violetgrass? "Qingxu Pool"

Q: In which of these locations can Dandy not to be found to try a time trial challenge? "The highest point of Qingce Village"

Q: Who occupies the eight seat among the Eleven Fatui Harbingers? "Signora"

Q: Which location can Musk Reef be reached via a Black Hole? "Cape Oath"

Q: What is the name of Anemo Hypostasis? "Beth"

Q: What is the element that attacks Pyro regisvine's weak point? "Hydro"

Q: Which of the following statements about the Sacrificial Bow is true? "An Elemental Skill must deal DMG for the Sacrifical Bow to have a chance of resetting it."

Q: Which of the following cannot be purchased from a shop in Mondstadt? "Rice"

Q: Which plant is not unique to Mondstadt? "Sweet Flower"

READ ALSO: 'FFXIV' Fat Black Chocobo Code Redemption Guide: How to Get It for Free While Watching Twitch Streams