RimWorld 1.3 Update, ‘Ideology’ Expansion Explained: What's Inside and What Players Could Expect 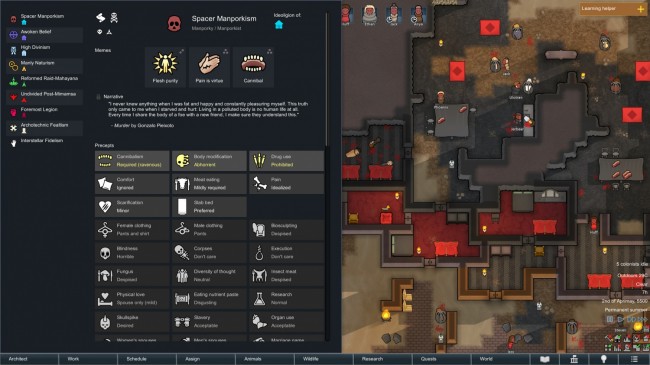 In the incoming "Ideology" Expansion Pack for "RimWorld," players can create their own belief system, including the way its believers would act their beliefs and the way their worhip.
(Photo: Photo from Tynan Sylvester's Twitter Page, @TynanSylvester)

Ludeon Studios announced that RimWorld's next update, the 1.3 Update, will be rolling out soon along with its "RimWorld Ideology" expansion pack.

In an announcement made by the developers through a blog post in Steam, they said that the new update will deliver new free content and a variety of improvements within the game.

For those who did not know, RimWorld is a construction and management simulation game that was released in 2018. Players will control a "pawn" that was stranded in a planet located in the frontiers of known space.

These characters have a randomly generated set of traits that can affect how they can contribute to their colonies, what decisions they can make, and how their existence affect the characters around it.

As time goes on, new characters will join the colony after being rescued after crash-lading on an area within the map, being wandered in, or captured after the raid.

According to The Nerd Stash, RimWorld is not the easiest title to pick up and play, but once the players are in the grove and understand the gameplay, it will become their favorite game.

According to the game developer's blog post in Steam, RomWorld's 1.3 Update is "15 months of improvements," hence it was expected that it will a big one.

Several overhauls were made in the game during the update. One of these was that regarding the in-game animals and how they work within the colony. According to Tech Raptor, the update implemented a new pens and fences system.

With the update, the animals will be more productive and has more focused roles, but because of the newly implemented in-game system, some animals will be kept in fenced pens and can be led around by farmers.

Also in the update, enemies will be more aggressive against any fortified locations with a new raid type called "Breaching." With Breaching, they can bring special wall-breaking tools, like breach-axes for tribals and grenades for pirates, to get into the side of the base.

Another implemented addition includes any drag-move formations will allow its players to order its fighters to arrange themselves in a line using a single mouse command. They can also order a fighter to pick up a downed person and carry them to a place using normal movement controls.

Other additions that will be implemented during the 1.3 Update includes better rendering techniques for the colonists, massive support for modders, and the cosmetic addition of beards.

Time to Create Beliefs with the Ideology Expansion

Along with its 1.3 Update, RimWorld will release its Ideology Expansion Pack. According to Tech Raptor, this expansion pack is focused around the idea of allowing the game's players to roleplay more, creating a feel of story-making within the game.

In Ideology, they will have the ability of creating a belief system, including a pseudo-religion with their associating gods, priests, temples, and the kind of worship its believers will do.

According to the game's blog post, players can mix and match different core elements of their custom belief system, as well as the believers' individual percept.

Also in the Ideology, a new quest category where you can be your very own Indiana Jones and hunt for ancient artifacts as the colonists break into ancient structures.

There will be also new special trees that are symbiotically linked with dryads that can be controlled and grown in different castes.

According to Tech Raptor, both the RimWorld 1.3 update and the RimWorld Ideology will be released in about two weeks. Players can also play its beta version by right-clicking on the game in their Steam library, going to "Properties," select "Betas," and pick up the beta version of the 1.3 Update.

TAG RimWorld
© 2020 Game & Guide All rights reserved. Do not reproduce without permission.