Twitter Allows the Use of Security Keys for Multifactor Authentication: How to Add It to Your Profile 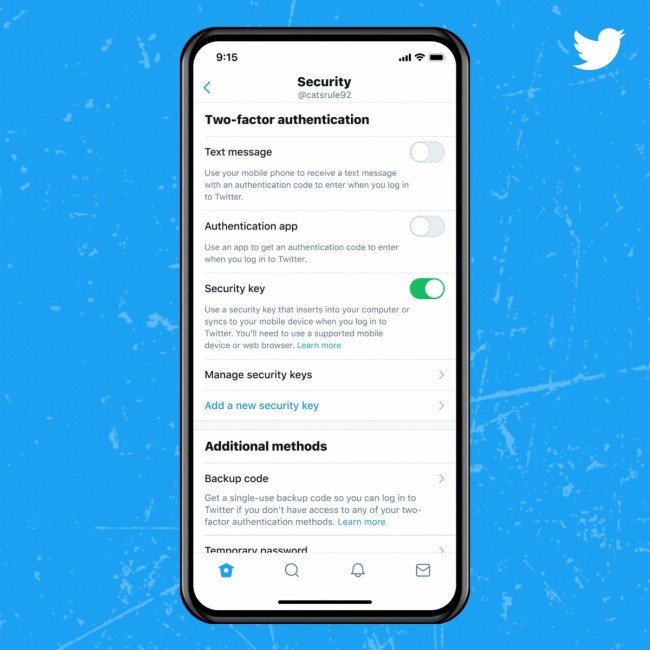 Twitter adds another way to activate the social networking site's multifactor authentication -- thru the help of a security key. It was after the social media website approves the use of the said peripheral for security purposes.

According to Android Police, users can now log in to their accounts on Twitter with the help of USB, Bluetooth, or NFC-based security keys.

Before this, Twitter revealed last December of 2020 that they are considering the use of security keys as means for their multifactor authentication, then last March of this year, they allow those who had multiple security keys to enroll and log in for both its Web Version and the Mobile Version.

Now security keys can be your one and only two-factor authentication method on mobile and web.

Learn more about how security keys can protect your account from attacks: https://t.co/Ta7uQSFhi6 pic.twitter.com/aPDOnbRtVk

How Does It Work

Basically, a security key is a peripheral that looks like a USB thumb drive, but it contains as a "supplementary" key to a website that requires private log-in credentials to enter.

According to TechSolidarity.org, this works in tandem while entering a password on sites that supports these as tools for their multifactor authentication.

Using physical security keys, according to The Verge, have advantages over other forms of multifactor authentication such as an authenticator app or sending a code via SMS as they are vulnerable and it can easily intercepted by cyber criminals.

On the other hand, physical security keys, according to SoMagNews.com, have built-in protection features such as differentiating legitimate websites from malicious pages and blocking phishing attempts, making the breach of those sensitive log-in credentials even more difficult.

In the recent years, the social networking site has added a number of features to reinforce their login security. In 2013, they added the aforementioned use of SMS as part of their multifactor authentication. In 2017, they added the use of authentication apps such as Google Authenticator and Authy.

In 2019, Twitter, allows its users to enable the multifactor authentication without giving away their mobile number, a positive change considering that sending authentication codes via SMS are susceptible to SIM-swapping attacks.

How to Add a Security Key, How to Sign in

According to TechSolidarity.com, in order to set up a security key to Twitter, one must possess the physical peripheral. Once you acquired the physical security key, you can go to the "Settings and Privacy" in Twitter by clicking on the "More" tab on top of the "Tweet" button.

Once you are in, click the "Two-factor Authentication," then tick the box right beside the "Security Key" option. You must enter your password first before proceeding. Once entered, you will be greeted with message regarding the use of security keys for your multifactor authentication. Then, press "Start."

Once you are in, you will be asked either to insert the peripheral into your PC or sync with your mobile smartphone over Bluetooth or NFC. After that, touch the key to add the security key into your account.

Afterwards, read the overview, then click "Start." You can now either to insert the peripheral into your PC or sync with your mobile smartphone over Bluetooth or NFC. Once inserted you can now touch the button on your key.

Follow the on-screen instructions to finish the setup. Once it is done, your security key will appear in the "Manage Security Keys" section under the "Two-factor Authentication." You can also add, delete, or even rename the security key itself.

READ ALSO: LinkedIn Data Breach June 2021 Affects Almost ALL Users: How to Know if Your Account Has Been Hacked