'Among Us' Collector's Edition Guide: Pre-Order Date, What's Inside, Goodies, How to Get 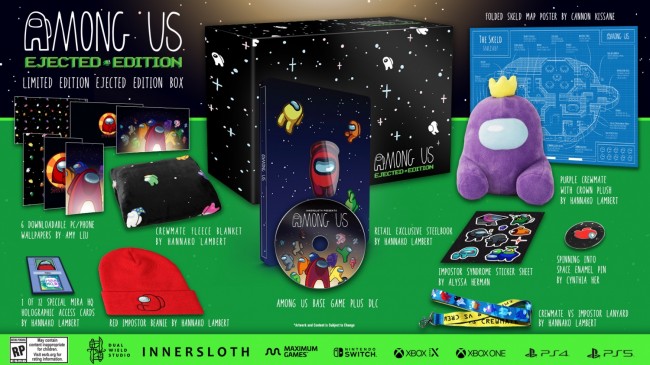 Players of Among Us can have their hands in these goodies once they bought the "Ejected Edition" Box, one of the 3 boxes for Among Us' Collector's Edition.
(Photo: Photo from Among Us' Twitter Page, @AmongUsGame)

The viral hit online multiplayer social deduction game Among Us is now three years old since its first release in Android and iOS smartphones on June 15th, 2018, and to celebrate this event, InnerSloth, the developers of the game, will release three Collector's Edition Boxes for the game's console version.

According to Destructoid.com, the said project is a collaboration between the developers, Maximum Studios, Dual Wield Studios, and Robot Teddy.

This will might be the developer's "thank you letter" to those who played the game, especially during the Covid-19 pandemic, where it was soared into popularity thanks to video game streaming and memes.

EXCITE!! Among Us Collector's Editions for console will be coming to online and retail thanks to @MaximumGames ✨ get ur choice of 3 diff versions and prepare for murder

*release date for Xbox and PlayStation have NOT been announced yet pic.twitter.com/SN4SqUH30N

All of the three Among Us Collector's Edition Boxes has the copy of the game itself and all of its downloadable content (DLC) items, which consist of the Airship, Polus, and MIRA HQ Skins, a Hamster Pet, a Bedcrab Pet, a Brainslug Pet, a Stickmin Pet, and the Mini Crewmate bundles.

They will also each have retail exclusive DLCs, and those are the things that are uniform in these boxes as each of them have different goodies that players want to have their hands on.

According to the Maximum Games' Store page for the product, the Crewmate Edition will have a 3D Lenticular Case, an Imposter Syndrome Sticker Sheet, 1 of 12 Special MIRA HQ Holographic Access Cards, a folded sketch poster of the game's map, and a redeemable code for 6 PC and Phone Wallpapers.

For the Impostor Edition, it will also have a 3D Lenticular Case, an Imposter Syndrome sticker sheet, 1 of 12 Special MIRA HQ Holographic Access Cards, a folded sketch poster of the game's map, and a redeemable code for 6 PC and Phone Wallpapers.

It also includes a Crewmate vs Impostor Lanyard, a Purple Crewmate plus, and a Spinning into Space Enamel Spinner Pin.

Before these, Limited Run Games first released a Collector's Edition box for Among Us, which contains a working Emergency Button where you can "call an emergency meeting" as emergency sound from the game will be played by pressing the button.

It also has a jewel case with the physical disc which contains the game's official soundtrack, an official G2 Blu-ray sized SteelBook case featuring a digital artbook and an interview disk, a reversible 18 inches by 24 inches poster, and download codes for both Steam and Epic Games Store.

How do you Get Them

The Among Us Collector's Edition boxes are now available for pre-order through Maximum Games Store online and it will be shipped on December 31st. According to Tech The Lead, the Crewmate Edition will be sold for $29.99, the Imposter Edition for $49.99, and the Ejected Edition for $89.99.

According to CogConnected.com, InnerSloth said that the Xbox and the PlayStation versions of the Collector's Edition Boxes still do not have a definite release date.

TAG Among Us
© 2020 Game & Guide All rights reserved. Do not reproduce without permission.