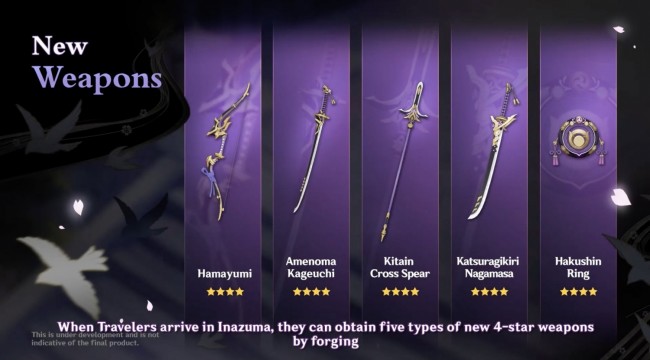 The 4-Star weapons that are presented in this photo are up for grabs in Genshin Impact once its Version 2.0 Update commenced. Players may obtain these weapons through crafting.
(Photo: Photo from Genshin Report's Twitter Page, @GenshinReport)

With the upcoming biggest update for Genshin Impact in the form of the Version 2.0 Update on the way, fans of the multiplayer online role playing game (MMORPG) will have the glimpse of the new weapons and artifacts that will be available in the game once the said update has been rolled out.

As mentioned before, two new Artifact Sets will be introduced in Genshin Impact's Version 2.0. These are Emblem of Severed Fate and Shimenawa's Reminiscence.

The new 4* and 5* weapons that are coming in version 2.0! #原神 #原神アプデ情報 #Genshin_Impact #genshinimpact #Inazuma #genshin pic.twitter.com/oRgddQCrcU

According to Clutch Points, the set bonuses from Emblem of Severed Fate includes an 20% energy recharge boost for the 2-piece set, and a 25% of Energy Recharge Elemental Burst DMG increase and a 75% maximum bonus DMG for the 4-piece set.

This artifact set can be suitable for Mona, as her talent allows stacking of Energy Recharge to significantly increase her damage. Several characters with powerful Elemental Bursts like Xingqiu, Xiangling, and Beidou can also be benefitted by this artifact set.

On the other hand, bonuses for the Shimenawa's Reminiscence includes an 18% attack boost for the 2-piece set, and a DMG boost by 50% for 10 seconds for every Normal, Charged, or Plunging Attack with a 15 Energy loss once they cast an Elemental Skill if the character has 15 Energy or less for a 4-piece set.

This artifact set suits Yoimiya and other characters who rely solely on basic attacks such as Keqing, Razor, and Ayaka.

As aforementioned earlier, there are two new 5-Star weapons that will be rolled out during the Version 2.0. These are the Mistsplitter Reforged and the Thundering Pulse.

According to Sportskeeda, the Mistsplitter Reforged is a weapon focused on Elemental DMG, and can be well suited to the new character, Kamisato Ayaka, who has an elemental Skill and Elemental Burst that can deal Cryo-based DMG, while activating the weapon's passive can provide even more Elemental DMG.

On the other hand, the Thundering Pulse bow set focuses on ATK multipliers. With certain levels of the Thunder Seal, it can further increase the wielder's Normal Attack's Base DMG. Yoimiya is well suited for this weapon, as most of her damage comes from her Normal Attack.

Aside for the two new 5-Star weapons, five new 4-Star weapons were added by miHoYo for the upcoming Genshin Impact update.

The new 4-Star weapons, according to InsideSport.co, are the Hamayumi Bow, that can increase DMG form a normal attack by 16% and from a charged attack by 12% and The Amenoma Kageuchi, which the wielder can use "Succession Seeds," which are consumed by Elemental Burst.

It also has the Kitain Cross Spear and the Katsuragikiri Nagamasa, which both of them that can increase the Elemental Skill DMG by 6%, and the Hakushin Ring, which can reduce an Electro Elemental reaction while increasing the bonus Elemental DMG for 6 seconds.

How to Craft the 4-Star Weapons

According to Touch Tap Play, the 4-star weapons can be crafted using the Northlander Weapon Billet prototypes and other materials including the Amethyst chunk and the White Iron chunk.