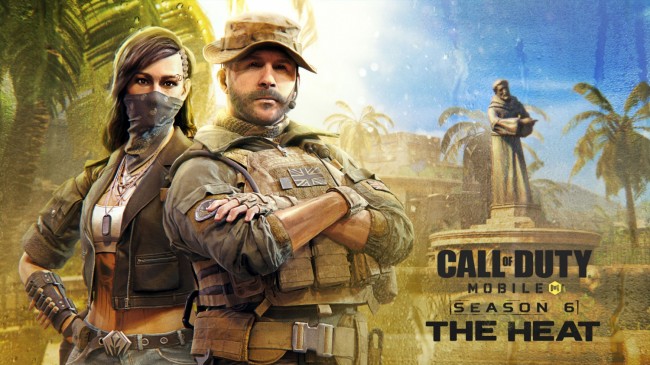 Call of Duty: Mobile is expected to welcome its new season as the game's Season 5 is drawing to a close. Activision, the developers of the massive multiplayer shooting game, recently announced the arrival of its incoming Season 6, which it will be called as "The Heat."

The said new season, according to Dot Esports, will bring in new operators, weapons, maps, operator skills, rank series, and Battle Royale modes, all of which were rolled out to the game's public test server few weeks ago.

According to InsideSport, the said maps was first seen, and released, in Call of Duty: Mobile's Chinese version. The Slums map was also teased by the developers in a tweet showing a reflection in a puddle of water revealing a statue and surrounding houses, which is similar to the Black Ops II map.

Stack, on the other hand, will join along with the other maps for the Gunfight map rotation for the said new season.

Aside from the new maps, "The Heat" will bring back the Zombies in the game in a form of "Undead Siege," a Call of Duty: Mobile's new Zombie Mode, after Activision released a teaser video regarding it.

The said return is also seen in Call of Duty: Mobile's Chinese Version as an in-game event, and according to Gamepur, the theme of the said video is similar to Die Maschine, a Zombies map that was released in Call of Duty: Black Ops Cold War.

According to the blog post in the game's website, the said mode's objective is for players to survive against waves of the undead over a period of five days and five nights using turrets, guns, and teamwork, while scavenging for supplies and equipment during the day.

A new Battle Pass will also be released in Season 6, and according to Dot Esports, it includes a new MX9 rapid fire submachine gun, the Swarm Scorestreak, an AK-47 - Epiphany Weapon Blueprint, a Rugged Calling Card, and others including Call of Duty Points (CP).

According to the game's blog post, those who handle the Premium Pass will have the chance to earn a Rosa - Double Agent, Price - The Captain, and Domino - Revolutionary character skins, the KN-44 - Clout, MX-9 - Stone Serpent, and ICR-1 - Blood Money Weapon Blueprint, as well as Calling Cards, emotes, and other items.

Other additional content for the incoming season includes new seasons for Ranked Series and Clan Wars. Players in the Ranked Series will be rewarded with the CR-56 AMAX - Street Venom (for those who earned Master I in Multiplayer) and a Lerch - Penalty Kick (at Master III in Battle Royale).

Players for the Clan Wars, on the other hand, will get a new Firebreak Operator skin with equippable aesthetic items, as well as the RUS-79U - Cagebreaker Weapon Blueprint.

When is the Release Date

According to Charlie Intel, the Season 6 "The Heat" for Call of Duty: Mobile will be released on July 29th. The said season update will kick off at 5:00 PM PST (7:00 PM CST/8:00 PM EST). The said update will be available to download on the Google Play Store and the Apple App Store.

According to the game's blog post, the new Undead Siege Zombie Mode will be launched on July 31st.

According to Gamepur, Activision will be releasing more teasers regarding the new season every week on their YouTube Channel, as well as in their social media pages.

READ ALSO: 'COD: Warzone' Gulag Glitch: How to Do and Get Into It, Location + How Does it Works

TAG Call of Duty: Mobile
© 2020 Game & Guide All rights reserved. Do not reproduce without permission.