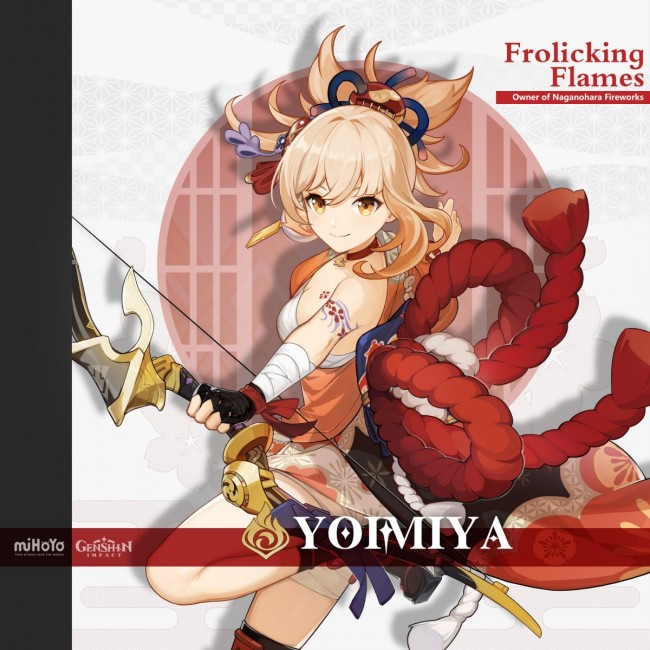 The Queen of Summer finally brings in the bang to Teyvat as Yoimiya makes her debut in Genshin Impact as part of a new banner for players who want to roll for the said character.

The said arrival also comes with a trailer that was released by miHoYo, the developers of the game, which showcased the Pyro character, who is one of the three new heroes that was introduced along with the archipelago of Inazuma.

As mentioned earlier, Yoimiya is a 5-Star Pyro user who wields a bow. In the list of her moves enlisted in Forbes, she has a Charged Attack where she can perform a more precise Aimed Shot with an increased DMG.

While she is aiming for her Firework Flare-Up Normal Attack, flames would start to accumulate on the arrowhead, which has effects that will depend on how long the said flames has been charged.

Once released as part of the Aimed Shot, those Kindling Arrows will home in on nearby enemies, dealing Pyro DMG when it hit them.

Her Elemental Skill, Niwabi Fire Dance, will make Yoimiya wave a sparkler, causing to create a ring of saltpeter that will surround her. This will trigger the "Niwabi Enshou," which converts her Normal Attacks into Blazing Arrows, increasing their damage and convert into Pyro DMG.

During the duration of the Niwabi Enshou, her Normal Attacks will not generate any Kindling Arrows at Charge Level 2, and it will deactivate once Yoimiya leaves the area.

Her Elemental Burst, Ryuukin Saxifrage, will make her leap into the air and fire rockets at enemies that could deal Area of Effect (AoE) Pyro DMG while marking one of the opponents that were hit by the rockets with Aurous Blaze.

Those who were marked by the Aurous Blaze will be exploded after being by a Normal, Charged, or Plunging Attack by any members of the party other than Yoimiya. Elemental Skills and Elemental Bursts can also trigger said explosion. Once "detonated," it will deal AoE Pyro Damage.

Enemies who were marked by the Elemental Burst that were killed before the duration expires will pass its effect on another nearby enemy, who will also have the remainder of the duration.

One Aurous Blaze can be detonated every 2 seconds. If Yoimiya is down, its effects that were created through her skills will be deactivated.

Like any characters in Genshin Impact, Yoimiya can be "Ascended," or according to game8.co, going past its level cap, providing her additional bonuses such as raising her max level, base stats, and Ascension Bonus Stat, as well as unlocking her new Talents.

According to Ginx, players who want to Ascend Yoimiya should grind for materials such as Agnidus Agate Slivers, Fragments, Chunks and Gemstones, Naku Weeds, Divining, Sealed and Forbidden Curse Scrolls, and Smoldering Pearls.

In order to have those Agnidus Agates and its variants, players must get them from the drops after defeating both the Pyro Hypostasis and the Pyro Regivine Bosses. The "Wolf of the North" challenge and the Primo Geovishap Boss can also drop this material.

For the Smoldering Pearl, they can get it also from the Pyro Hypostasis Boss, which they could find in the boss area north of the Kujou Encampment, located at the Kannazuka Island in Inazuma.

For the Naku Weed, they can find it scattered near the Grand Narukami Shrine, buy it from the Inazuma General Store, or plant it inside their Serenitea Pot. For the Scrolls, they can get it through drops after killing Samachurls.

As mentioned before, Yoimiya will be included in her own banner, "Tapetry of Golden Flames," alongside Sayu, who is a 4-Star character, and two other characters. miHoYo will might announce the other two characters that will be joining Yoimiya and Sayu in the banner in future dates.

As for her release date, according to vg247.com, Yoimiya will be rolled out in Genshin Impact sometime in August 11th.

READ ALSO: Genshin Impact Beidou Guide: How to Get the Character for Free + Best Builds, Claymores for Her