'Battlefield V' Free Characters Guide: How to Get the Elites, Grab a Copy on Amazon Prime Gaming 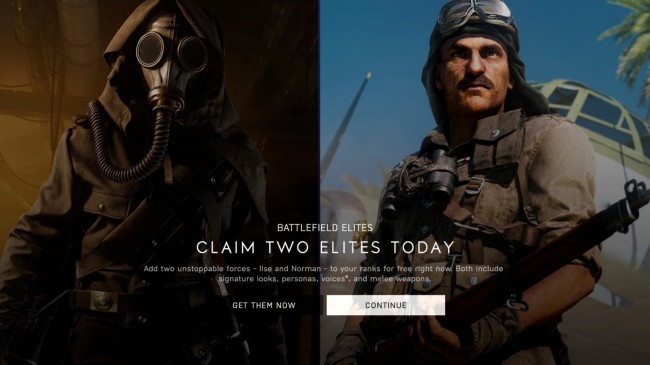 While waiting for Battlefield 2042 to launch, players who are still playing Battlefield V can avail the game's offer of giving them two Elite characters to bolster their in-game roster.

For players who do not have the copy of the first person shooting game, but wants the free characters, they do not have to worry as Amazon Prime Gaming is giving away Battlefield V, but only for those subscribed in the said Amazon Prime service.

The Elites are Coming (and How You can Earn them)

According to Gamespot, a tweet revealed that Battlefield V players can receive both Norman Kingsley and Ilse Schattenwolf for free.

Both Kingsley and Schattenwolf were released last July 30th, 2019 as part of the Defying The Odds, the Chapter 4 of the game's Tides of War. The said chapter, aside from adding these two to Battlefield V's Elite character roster, also included new maps and weapons, as well as an increase to the max rank attainable.

READ ALSO: Amazon Prime Gaming Free Games List Includes 'Battlefield 1 and V': How to Get Them for Yours to Keep

Kingsley is a British Allied Forces Elite character that, according to his profile in Electronic Arts' Battlefield webpage, is consider as a good luck omen along his fellow soldiers as his arrival in the battlefield meant that things will turn in his squad's favor.

An explore in the most hostile environments and a wilderness survival instructor, Kingsley uses his endurance as well as his expert rifleman skills to find unknown flanking routes in the most unfavorable terrain.

On the other hand, Schattenwolf, a German Axis Elite character, is trained in psychological warfare and uses her experience as a counter-espionage operative in adapting to both urban and rural combat zones. Aside from environmental concealment, she is also proficient in hand-to-hand combat.

Her anti-social tendencies can be a downside as this can make her ability to work with others questionable and might put her under inquiry. However, thanks to the favor from her squad mates, she can strike fear to the enemy, or to keep their distance.

Both of these elite characters would cost 990 Company Coins, but according to mp1st.com, both Kingsley and Schattenwolf can be acquired by players by simply logging in the game.

It is unclear, however, if the how long the said offer for these Elite characters would last or if players need to buy them after an undisclosed time period.

Claim a Free Copy of Battlefield V in Prime Gaming

As mentioned earlier, players who did not own a copy of Battlefield V but wants to have both Kingston and Schattenwolf for free can grab their own copy of the first-person shooting game for free, but only if they are subscribed to Amazon Prime Gaming.

According to Comicbook, Amazon's gaming service is giving away the game for free until October 1st, and players can redeem its Standard Edition. Aside from Battlefield V, A Normal Lost Phone, a 2017 puzzle game, and Another Lost Phone: Laura's Story, its spiritual sequel, is also up for grabs for free.

In order to attain their free copy of Battlefield V, players need to sign their account into the Amazon Prime Gaming site and claim the digital product code.

If they are not subscribed to the said service, they can try its 7-day free trial. If they have an existing account or subscription, they can skip this step and log in straight to the website.

Once they have claimed the said code, they will need to proceed to the website of Electronic Art's Origin digital game store or its PC client, then redeem said code.