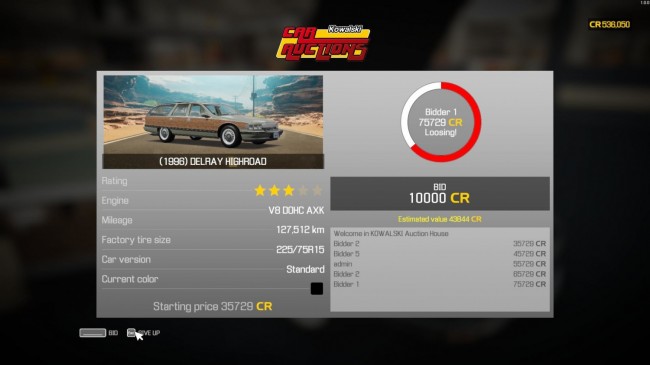 Car Auctions is one of the ways of earning CR in Car Mechanic Simulator 2021
(Photo: Photo from Steam Store Website)

In Car Mechanic Simulator 2021, players have the ability to obtain any one of the 72 cars that the game is offering. All of which can be seen in several places such as the Barn, the Junkyard, the Car Salon, and in car auctions.

Unlike the Barn, where they can attain any random car that they could see there for free, the cars in the Junkyard and the Car Salon, as well as in car auctions, can be owned if they buy them.

This is the same with the car parts. At some cases, they can look, and collect, parts in the Junkyard, but if they want to have a brand new set of car parts, they can buy them at the store.

To make the long story short, most of the items in the game are need to be bought with the help of the game's currencies.

The Yellow CR that players usually see on the upper right portion of Car Mechanic Simulator 2021 is the standard in-game currency. This form of money can be gained through either completing a Story Mission, selling a car through car auctions, or selling parts that are scrapped.

The said currency is the one commonly used in buying parts that the players using in restoring a car, as well as cars that they want to restore or, in the case of the Car Salon, where the cars in there are in pristine out-of-the-manufacturer condition, they want to add in their collection.

The value of the cars in CR will also depend on the car model, ranging from the cheap ones like the Katagiri Katsumoto, which according to naguide.com, costs 34,079 CR, to the expensive ones such as the Sakura Supa ZJX, the most expensive among the game's base cars, with the cost of 127,146 CR.

Players do take note that the value of the cars that came from the game's downloadable content (DLC) packs such as the Nissan pack are not yet included in the list, so they are not sure how much would they cost if they were seen in the Car Salon.

The Blue one, on the other hand, is the new addition to the Car Mechanic Simulator 2021. According to MagicGameWorld.com, this kind of currency is often used in upgrading car parts, that can maximize a car's Tuning percentage once they install it in the car.

Usually, players can use the said currency to upgrade internal parts such as the engine and its components such as camshafts, pistons and carburetors, and electronics like fuses, relays and batteries.

The higher the value to upgrade said part, the higher its level would turn out after. For example, according to Riot Bits, in order to upgrade a part into 3-stars, players need to pay more of the Blue Currency.

The said currency can be obtained by the crates that they will get if they are traversing inside the barn. The said crates can also contain CR, as well as EXP Points.