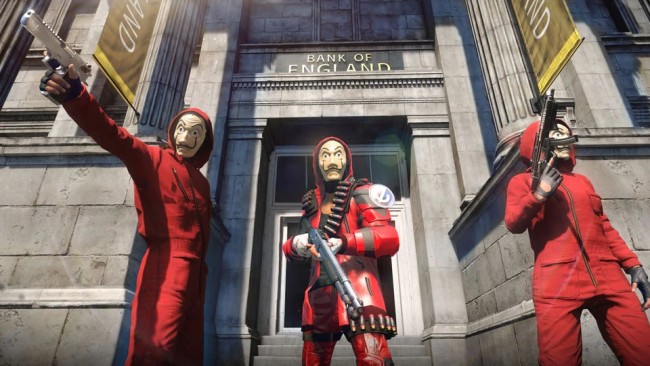 Ubisoft announced that Watch Dogs: Legion will team up with Netflix in creating a special mission in celebration of the release of the fifth season of La Casa Papel, or Money Heist. This means that the henchmen of The Professor will meet the hackers of DedSec in helping to take down Clan Kelly.

The said crossover between the stealth game and the Spanish series will bring in a new, free co-op mission, along with new in-game elements, which is seen in the launch trailer released by the developers in their YouTube Channel.

The Heist is On

In the said launch trailer video for the new co-op mission, it shows three individuals, wearing the signature red jumpsuits and Salvador Dali masks from the series while armed with guns, trying to rob a bank in England and stealthily eliminating everyone who is guarding inside.

Money Heist takes over, as part of an exclusive co-op mission. Suit-up and embark on a crypto-heist for the Resistance! Complete this challenge with friends and unlock an exclusive skin for your recruits.#WatchDogsLegion

However, the said attempt is not just a bank heist, but according to a voice on the background, it was a "crypto-heist," which means that they will try to rob the bank's cryptocurrency reserves inside.

Aside from the said elements coming from La Casa de Papel, the said trailer also shows a large hovering drone-like machine where the said individuals are riding.

The said co-op mission, which was named "Paperless" according to the blog post made by Ubisoft in their website, lets up to three players to work hand-in-hand to execute the crypto-heist at the aforementioned bank, where the forces of Clan Kelley take over and have storing millions of counterfeit ETO on their network.

According to Polygon, players can either sneak in to infiltrate the bank and eliminate the guards, or if they want to try an even louder approach, they can attack them head-on with AK-47s, shotguns, and pistols.

Aside from eliminating the guards, players will also need to disable the firewall before downloading the data of the counterfeit crypto. Once they finished the job inside the bank and secure the said crypto, they can now escape across the River Thames using the aforementioned hover drone.

According to NME, once the players are done completing the heist, an exclusive skin for the recruits that might be in theme to La Casa de Papel will be given to them as reward.

How to Get the Mission

According to Ubisoft, the Watch Dogs: Legion­-La Casa de Papel crossover-exclusive Paperless co-op mission is available for download for free for all of the game's Online players. As mentioned earlier, a La Casa de Papel-theme recruit skins will be given to those who completed the said mission.

Aside from the said crossover, players can also participate in the Watch Dogs: Legion-Assassin's Creed crossover event where they can control Darcy, a modern-day Assassin that will help DedSec in eradicating their enemies, including Clan Kelly.

The said crossover between two Ubisoft games is one of the new offerings of the game's recently released Title Update 5.5, with Darcy being available as part of its Season Pass, along with new missions.