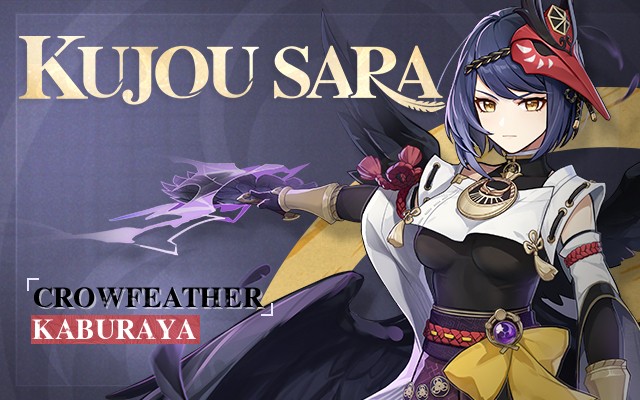 The trusted tengu general of the Raiden Shogun is now marching in the battlefield as Kujou Sara has come forth into Genshin Impact as one of the new heroes that will be rolled out during the Version 2.1 Update.

The 4-Star Electro user, according to vg247.com, will offer strong skills and party buffs in the battlefield, making her a suitable Support character in every players' party in the game, as well as freedom on how to build her her thanks to her flexibility.

As mentioned earlier, Kujou Sara is a 4-Star character that uses Electro-based ranged attacks with the help of her trusty bow. According to SegmentNext, she can shoot five consecutive shots in her Normal Attack, while dealing Electro damage once her Charged Attacks are fully charged.

Today we'd like to introduce you a general of the Tenryou Commission — Kujou Sara!

Her Elemental Skill, Tengu Stormcall, will summon a Crowfeather after she retreats, which will be active for 18 seconds. If a fully active shot is fired at an enemy in the time of the Elemental Skill's activation, the Crowfeather will go at that target's location.

This will trigger the Tengu Juurai: Ambush, which can deal Electro Damage as well as granting Kujou an attack boost buff that would be based on her base stats.

Kujou also has a set of passive skills, including Land Survey, which can reduce the time consumed while completing an expedition by 25% when dispatched in Inazuma.

Her Immovable Will can decrease her Aimed Shot charge time by 60% while she is in the Crowfeather Cover state after casting the Tengu Stormcall, while her Decorum can restore 1.2 energy to all of Kujou's party members for every 100% energy recharge she has once her Tengu Juurai: Ambush hits her enemies.

There are a lot of bow options for players to equip with Kujou Sara, depending on how they want to build her.

The Amos' Bow, according to Forbes, with its 608 Base ATK stat and 49.6% ATK boost once it hits Level 90, can increase Normal and Charged Attack DMG by 12%. It can also increase the same DMG by 8% for every .1 seconds, which is stackable up to 5 times.

The Skyward Harp, with its 674 Base ATK and a 22.1% CRIT Rate when it hits Level 90, can increase the bearer's CRIT DMG by 20%. Hits coming this weapon will have a 60% chance to inflict a small AoE ATK DMG, while dealing 125% Physical ATK DMG. This can only occur once every 4 seconds.

The Favonius Warbow, with its 454 Base ATK and 61.3% Energy Recharge when it hits Level 90, once it hits a CRIT, it will haver a 60% chance to generate a small amount of Elemental Particles, which can regenerate the bearer's Energy by 6 every 12 seconds.

The Stringless, with its 510 Base ATK and 165 Elemental Mastery when it hits Level 90, can increase the bearer's Elemental Skill and Elemental Burst DMG by 24%.

The masks can be obtained by exterminating hilichurls, while the Storm Beads, according to HoneyHunterWorld.com, can be farmed through exterminating Level 30+ Thunder Manifestations.