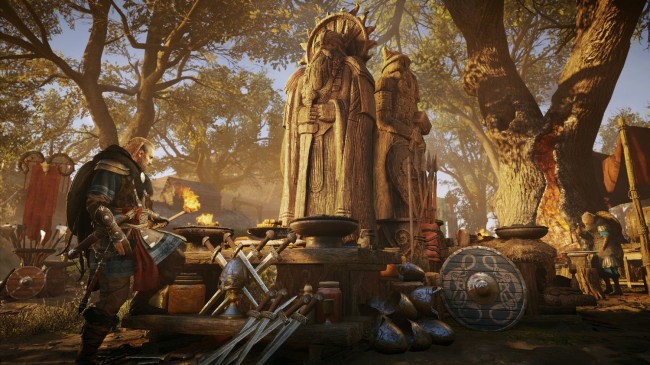 Assassin's Creed Valhalla has received its Title Update 1.3.1, bringing in new additional elements in the stealth game. The said update will add in a new combat difficulty, as well as new River Raids for players to take and complete.

The game will also receive gameplay changes thanks to the Title Update, including tweaks for its Rune Perks and other bug fixes.

The Title Update 1.3.1 added in the new Aesir difficulty in Assassin's Creed Valhalla. According to Gamespot, with the said combat difficulty, once it is set in the game, the player will receive a 200% increased damage, but it will inflict standard damage to the opponents.

The healing received after taking up rations will be reduced to 40%, while the window for a successful parry after an attack will also be reduced to 38%.

Aside from the new difficulty, the title update also provided tweaks in terms of healing in different game difficulties. Now, players who are playing Assassin's Creed Valhalla can be healed 100% if they are playing in Easy mode, 80% in Hard mode, and 60% in Very Hard mode.

Assassin's Creed Valhalla's Title Update 1.3.1 also brought in updates to its River Raids. According to Push Square, players can now take Raids in the Erriff, Berbha, and Rhine Rivers, as well as they can face 2 new River Champions and the Champions of Faith. They must defeat them in order to get rewards, including new weapons.

Speaking of rewards, the update will add new rewards to other River Raids that players can pillage, including the Lugh's Armor and five other weapons, including a short sword.

Other additions to the River Raids thanks to the title update are three new abilities that can be found in the monasteries -- Spinning Harpoon, a spinning attack that knocks back enemies and can be combined with other harpoon-based attacks, Percussion Arrow that can create a shockwave that staggers and damages nearby enemies once it hit a shield, and Precision Axe Throw, which can target an enemy's weak spot.

Other Changes, Tweaks, and Fixes

Aside from the aforementioned additions, the Title Update 1.3.1 for Assassin's Creed Valhalla will implement several changes, including one regarding the game's Rune Perks.

According to PSLS, the update will make them only affect the weapon they are socketed in. This means that players will have more freedom in creating more targeted loadouts. The said update also removed the cap that prevents any effects from Perks and Rune Perks from stacking beyond a certain threshold.

Also, the title update added skill nodes for short swords, scythes and sickles, as well as an ability for players who cannot upgrade their settlements to Level 6 due to lack of supplies to purchase said supplies at the settlement merchants.

The update will also make the players not to take damages from fire after destroying a boat, but will not receive any XP after completing daily quests in both Ireland and Francia.

Finally, the Title Update 1.3.1 addressed any issues and bugs inside Assassin's Creed Valhalla's Expansions, The Siege of Paris and Wrath of the Druids, as well as other issues within the game's Main Quests, World Events, Side Activities, River Raids and Mastery Challenge, along with other issues within its graphics, audio, and gameplay.