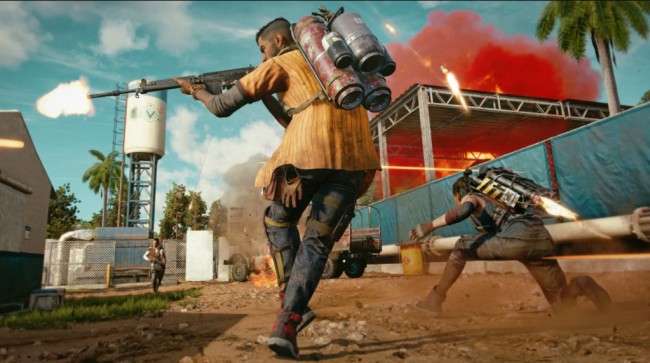 Ubisoft revealed a roadmap of their plans for Far Cry 6 after its October 7th release, which includes new additional content such as new Special operations and Insurgencies, as well as downloadable contents (DLCs) that players grab in the future dates.

The said roadmap also revealed possible crossovers that will bring new additions to the first-person shooting game, including a visit from a legendary actor, a classic movie series, and a Netflix-exclusive science fiction television drama series.

One of the said crossovers that Ubisoft revealed in the aforementioned roadmap, which is shown in a video posted in their YouTube channel, is their collaboration with the actor Danny Trejo.

According to the video, the actor will be a part of Far Cry 6 as a guest character for the "Danny & Dani Vs. Everybody" Crossover Mission. The said video features Dani Rojas, the game's protagonist, as she encountered encounter Trejo, who is in his Trejo's Tacos stall cooking while a gunfight is happening.

It is up to Dani and Danny, along with his trusty machete, to fend off the enemies while sharing the goodness of the latter's tacos to the citizens of Yara. The said crossover mission also comes with a machine gun-equipped tricycle that is perfect for on-the-road pursuits.

Another planned crossover that was revealed in the same video is the collaboration between the game and the Rambo series for the former's "Rambo: All the Blood" Crossover Mission.

In the said mission, a die-hard Rambo fan will join the revolution in fighting the Yaran army using tactics that he learned from watching the said classic action movie series that starred Sylvester Stallone.

The said teaser poster, which is styled like the 1980's movie poster, shows the character donning the full John Rambo gear, including the signature red headband, machinegun ammo rounds wrapped around his body, and a holder for the arrows, while holding a grenade launcher.

Finally, the Mind Flayer will invade Yara and make even a feared dictator cower as the Netflix drama series, Stranger Things, collaborates with the game in bring "The Vanishing" Crossover Mission.

In the said mission, players need to find their companion, Chorizo, while stopping the Shadow Monster in instilling more fear than the Yaran army.

Aside from the aforementioned crossovers, Ubisoft also revealed more additional content that will to Far Cry 6 after its release, including free Insurgencies that will be available every week from the game's launch date for players to clear.

Also, according to Press Start, six new Special Operations will be available for players for free this coming October 2021, which will bring new mechanics in the game.

One of said Operations, according to BestGamingPro.com, will make players snatch a highly volatile chemical weapon from Anton Castillo's arms dealers. In order to clear said Operation, they must bring the said weapons safely to an extraction point while making sure that it would not overheat.

The video of the said Special Operation shows a player going to a spring and a car shop in order to keep the said chemical weapon to cool down, which could only mean that they need to clear it in the fastest time possible.

Along with the aforementioned DLCs is the full Far Cry 3: Blood Dragon, which will be also available in the said Season Pass.

Vaas: Insanity will be available on November 2021, while Vaas: Insanity and Joseph: Collapse will be rolled out on January and March 2022, respectfully. Far Cry 3: Blood Dragon, on the other hand, will be playable on December 2021.