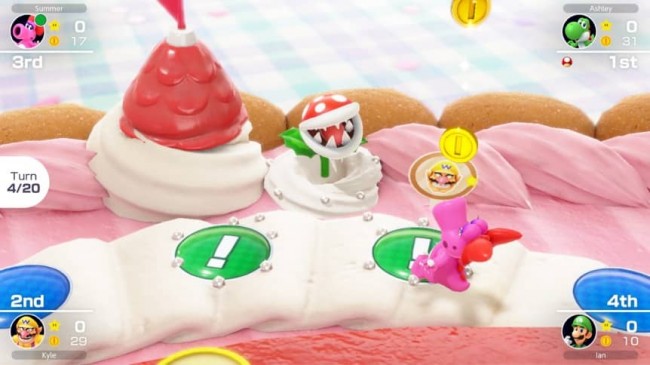 It is time to keep the party going as Nintendo revealed three new boards that will be playable for Mario Party Superstars in preparation for its October release. The said announcement was made during their recent Nintendo Direct livestream, which also shown a short glimpse of those new boards.

The said new boards, much like the other ones, will have different gameplay gimmicks, as well as a set of minigames, that will make a game with the player and its friends even more interesting and fun.

In the said Nintendo Direct livestream, Nintendo revealed the three new boards that will be included in the Mario Party Superstar. According to the video reveal, these boards are remastered versions of the boards that came from Mario Party games for the Nintendo 64.

Head to Mt. Minigames for minigame action and a variety of courses!

Woody Woods, a board from Mario Party 3, according to RadioTimes.com, will be joining the said list, including Yoshi's Tropical Island from the first Mario Party game and Horror Land from Mario Party 2. Players can now select these three new boards aside from the already revealed Peach's Birthday Cake and Space Land.

READ ALSO: 'WarioWare: Get it Together' Free Demo Guide: How to Play it for Free

In Woody Woods, Monty Moles will pop-out on every part of the board, changing every direction that players would take during their own turn, while in Yoshi's Tropical Island, players can use the Cheep Chomps that are swimming in the area to swap places with each other.

In Horror Land, Boos will give the players a harder time to collect some Stars in the said board as they will appear unexpected at night to snatch them. However, they will be appearing as statues during the day, so players need to observe the time of the day in the board.

Aside from the three new boards, according to Twinfinite, a new Mount Minigame board will be in the game, with seven courses filled with just minigames for players who either want to try them out, practice, or having a break from the boards.

They can also compete with other players, either locally or globally, for the longest minigames win streak in its Survival game mode, or accomplish said games with a friend in the Tag Match mode.

These minigames, as well as the boards, can be played online, so players can play them with their friends and family.

Mario Party Superstars will be rolled out for the Nintendo Switch this coming October 29th, however pre-order is now open in the Nintendo's e-Shop, as well as in other online video game retailers such as Amazon, GameStop, Walmart, and Best Buy.

READ ALSO: Nintendo's 'Game Builder Garage': What Tools Are We Expecting in This Game Creator System